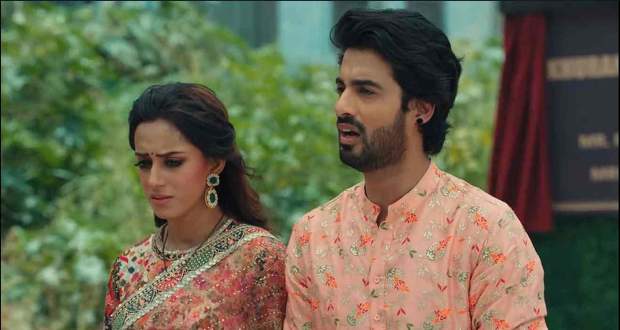 Today's Yeh Hai Chahatein 10th May 2022 episode starts with Revati taking Roohi to her room and demanding her to tell the truth.

Elsewhere, Preesha, Sharda, and Saaransh rush to Rudraksh and inform him about Revati leaving with Roohi.

Rudraksh gets worried for Roohi while Preesha clicks Rudraksh's pictures and says that she has a plan.

Preesha goes to the media and shows them Rudraksh's pictures while saying that Revati has falsely accused the Khuranas of killing Dev without any proof.

Back in Revati's room, Roohi recalls the incidents of the Annual function day to Revati regarding Dev coming to school and his intentions to kill her.

However, just before Roohi reveals the truth, Revati is called to the office by her senior police officer.

The police officer scolds Revati and shows her the news which shows Preesha bad-mouthing Revati.

Revati convinces her senior and she is sure of the Khurana family behind the murder of Dev.

Returning to her office, Revati convinces Roohi to tell the truth saying that she will let their family go.

Roohi reveals the truth till she was conscious after which Revati goes to the rest of the family and accuses Saaransh of killing Dev.

However, to save his son, Rudraksh takes the blame as he conjures up a fake story that he was the one behind Dev's murder.

Later, Revati goes to the morgue and sees Dev's body while the doctor informs her that Dev had a head injury but that he died due to someone strangling him.

Revati tells the doctor to start the process of getting the fingerprints from the dead body.

Back in the interrogation room, Preesha tells Rudraksh that they are innocent as they had thought Dev died due to the fall and wonder who strangled him.

Just then, Revati comes there and arrests Rudraksh for killing Dev while they insist that they did not strangle Dev.

© Copyright tellybest.com, 2020, 2021. All Rights Reserved. Unauthorized use and/or duplication of any material from tellybest.com without written permission is strictly prohibited.
Cached Saved on: Sunday 2nd of October 2022 06:33:11 AM