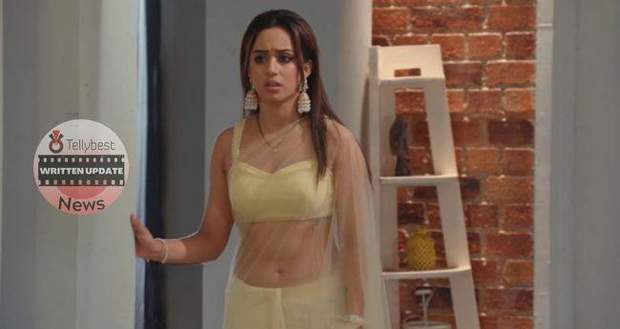 Rudra gets confused at first but Preesha explains to him that Saachi & Digvijay are talking to each other right now, as Preesha spied on Chacha Ji.

Rudra asks Preesha to keep track of Saachi so they can take Saachi to the commissioner.

Preesha asks the driver to overtake Saachi's car, along with Rudra who comes to her location.

However, Saachi is gone as her driver dropped Saachi off at the traffic signal.

Preesha starts to blame herself but Rudra says they still have a way to prove Arman guilty through the doctor who helped him vanish Preesha's memories.

Back at Thakur House, Preesha gives Arman sleeping pills and checks his phone for the doctor's number but it is not there.

She then calls Rudra to let him know about this while promising to torture Arman the next morning.

In the morning, Gopal brings a woman named Vijaylaxmi and introduces her as a good masseuse who can massage Arman's legs with hot oil.

Vijaylaxmi handles Arman roughly while he gets scared.

She pours hot oil on Arman's legs while Rudra watches all this through the video call, laughing.

Meanwhile, Digvijay scolds Preesha for making a video of Arman's poor condition while she lies saying she will show this to Dr. Gupta.

Arman complains of pain and Gopal says if he is feeling pain, that means sensations are returning back to his leg.

Digvijay gets excited and asks Vijaylaxmi to pour even hotter oil on Arman's legs while Rudra laughs out loud.

Arman scolds Chacha Ji and says he should feel this hot oil.

On the other hand, Pihu is frustrated and asks herself why she is thinking about Vidyut and his confession.

Just then she receives a call from Raj but doesn't pick it up.

At Khurana House, Vidyut feels guilty about speaking too much to Pihu when an angry Raj comes into Vidyut's room.

A frustrated Raj informs Vidyut that Pihu hasn't been receiving his calls since morning and it is driving him crazy.

Meanwhile, Preesha and Rudra meet Dr. Gupta along with Gopal & ask him for a way to meet the doctor who helped Arman.

Dr. Gupta says they can organize an all-India doctor's conference so Arman's doctor attends it.

Later, Raj meets with Pihu and confesses that he is in love with her.

Vidyut hears this while Pihu gets upset to see Vidyut watch Raj hug her.

Meanwhile, Dr. Gupta, Rudra, & Preesha organize the Doctor's conference while at college, Vidyut pulls Pihu into a corner & asks her why she didn't answer Raj back.

Pihu glares at Vidyut and tells him it is none of his business.

However, Vidyut states the reason Pihu didn't confess back is that she has someone else in her heart.

© Copyright tellybest.com, 2022, 2023. All Rights Reserved. Unauthorized use and/or duplication of any material from tellybest.com without written permission is strictly prohibited.
Cached Saved on: Monday 21st of November 2022 06:00:37 PMCached Disp on: Thursday 1st of December 2022 02:17:29 AM