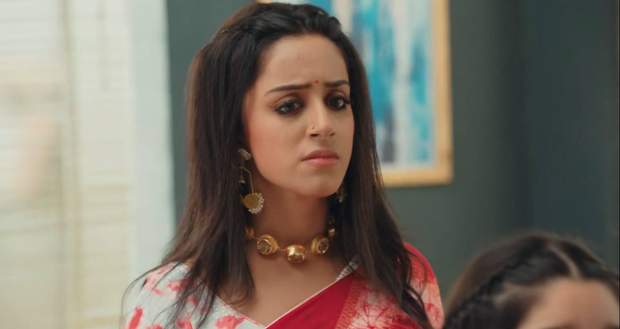 Today's Yeh Hai Chahatein 11th April 2022 episode starts with Rudraksh barging into the classes to find Dev and later roams around the school to find him.

Elsewhere, Yuvraj's car gets towed by the traffic police along with his shoes being stolen.

Rudraksh and Preesha manage to find Dev and bring him to the principal for a harsh punishment but the principal tries to save him by saying that his parents are out of town.

However, Alia reveals that her parents are not out of town after which the principal reluctantly suspends Dev for 15 days.

Yuvraj tries to run away after stealing sandals from the temple but gets into an accident on the way.

Later, Rudraksh overhears Preesha voicing her stress with Sharda and thinks to lift her spirits by planning a surprise.

At night, he messages her to come to the terrace which astonishes her with the romantic decorations done by him.

He comes out from hiding and makes her laugh by cosplaying as different heroes from the movies while she claps for him.

Afterwards, they spend a romantic time dancing together while gazing into the eyes of each other filled with adoration.

Rudra puts a jacket above both of them to get close but gets interrupted by the guard calling Preesha and tells her that some men are asking for her.

Both Preesha and Rudra go downstairs and the men start using vulgar language for Preesha showing a poster of Preesha with her number on it.

The men start dragging Preesha and fights with Rudraksh while Dev and his friend watch from a little far away and enjoy seeing them being tortured.

However, Preesha manages to free herself and notices a pipe and starts beating the vulgar men with it sending them away.

Meanwhile, Yuvraj wakes up in a hospital and feels delighted thinking that he is going to get free food and a place to sleep in.