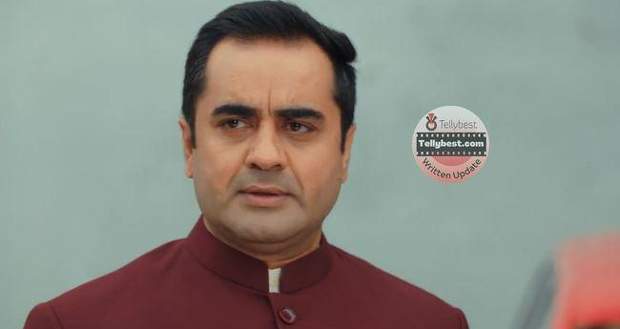 Today's Yeh Hai Chahatein 11th December 2022 episode starts with the police asking Digvijay if he has any proof to present himself as innocent and not cooking up stories.

The police decide to take Digvijay under their custody and take everyone's fingerprints to see who strangled Arman before his death.

Meanwhile, Sharda asks Rudra if Preesha & Digvijay would be released soon or not & Rudra answers that they have to reach their murderer's weapon first.

At the same time, Ruhi & Saaransh go outside with Ruhi telling him to reveal what all happened last night to Rudra.

Saaransh scolds her and says he is older than her so he knows what is the best thing to do but internally, Saaransh stays doubtful if he is doing the right thing or not.

At Khurana House, Vidyuth makes Pihu sit down and decides to tell her something she doesn't know.

However, before he can tell, three police constables come and summon Pihu & Vidyut to the police station.

At the police station, Rudra has already been summoned and Pihu says the police called them as they must have found a clue.

Preesha also comes but her expression is worrisome as Rudra passes her a mild smile to hang on tight.

The police officer comes & states that they found the person whose fingerprints matched the ones found around Arman's neck.

Vidyut stands up and confesses that it is his while Pihu & Rudra goes into shock, & ask him whether he killed Arman.

Vidyut denies doing so and narrates that night's tale when he went inside Arman's room and strangled his neck but when he asked him to back off, Vidyut backed off, as the fear of being labeled as a criminal again struck his mind.

Vidyut reveals that he wanted to tell to Pihu about threatening Armaan but he didn't, fearing it would harm her & the baby's health.

The police let Vidyuth go as he was with Pihu at the gynecologist when Arman was murdered but Digvijay & Preesha will still be in custody as they have no proof of being innocent.

Rudra meets Preesha in her cell and apologizes to her. However, she suddenly panics and tells Rudra to go home as her motherly instinct is telling her that something wrong is happening with the kids.

True to her words, when Rudra arrives home, Ruhi is laying on the floor with a fever while Sharda informs that their neighbor's sister came and treated her.

Sharda reveals that Ruhi had been mumbling Preesha's name over & over again but nothing coherent.

However, Saaransh internally blames himself for Ruhi's condition as she is hiding a big secret from everyone and is worried for Preesha.

Later, Saaransh comes from somewhere and asks Rudra how is Ruhi's fever now.

Just then, Rudra also gets a call from the police station & goes there to see what is the update.

At the police station, the officer shows everyone the knife with which Arman's murder happened as the murderer delivered it today at their doorstep in an interesting way.

Preesha asks the officer to reveal who is the murderer and the police hint that Preesha knows him well and takes Saaransh's name.

© Copyright tellybest.com, 2022, 2023. All Rights Reserved. Unauthorized use and/or duplication of any material from tellybest.com without written permission is strictly prohibited.
Cached Saved on: Wednesday 25th of January 2023 10:01:04 AMCached Disp on: Thursday 2nd of February 2023 09:02:35 PM