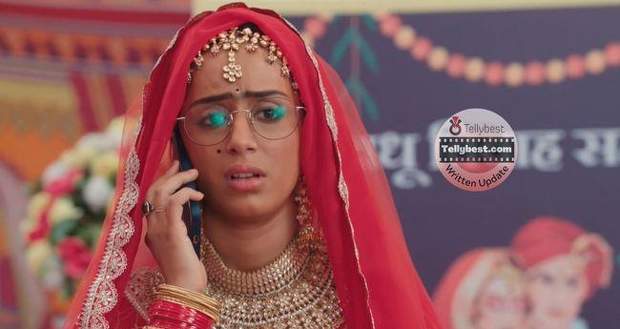 Today's Yeh Hai Chahatein 11th January 2023 episode starts with Mohit and Ishaani getting stuck in traffic while Ishaani calls Nayan to warn her about Sam.

However, due to the Pheras happening, Nayan does not pick up the calls and continues with the wedding rituals.

Ishaani gets worried while the traffic disperses and the driver rushes towards the marriage hall.

Ishani keeps saying that she won't be able to forgive herself if Sam married Nayan while Sam fills Nayan's hairline with vermillion and ties Mangalsutra around her neck.

Sam thinks that the vermillion will always remind Nayan that she is stuck with him while being in love with Mohit.

Ishaani and Mohit reach the marriage hall and Mohit stops Ishaani from entering as he tells her that Sam is also there.

On the other hand, the Iyer family returns home and gets shocked to see it all burned down while the neighbor aunty informs them that the house had a short circuit once they left.

Patti and Amma cry while Chintu asks when will Akka come.

Back at the marriage hall, the wedding is complete with the pairs exchanging garlands while Mohit comes there and shouts that the marriage cannot happen.

Nayan removes her veil and asks him how come he is there while Mohit tells her that she is not marrying the person she thinks she is.

She asks who is it then while Sam replies that it is him and says that she could not marry the person who is in front of her (Mohit).

He removes his headpiece and reveals his identity shocking everyone.

Sam taunts both Mohit and Nayan so that they could not live happily ever after irritating Aliya.

Sam says that he knew Mohit's plan of marrying Nayan and then eloping to Australia with her.

Nayan realizes that Sam misunderstood that Mohit loves her and not Ishaani which is why he took Rahul's place.

Fearing anything bad happening to Ishaani, Nayan thinks to continue with Sam's misunderstanding to save Ishani and does drama with Mohit.

However, Sam accuses Nayan of being a greedy person and tells her that she accepted the marriage cause he is richer than Mohit.

Nayan looks at him angrily while she gets a call from Amma.

Nayan picks up the call and Chintu reveals to her that their house is burned down.

Being worried for Amma's health, Nayan rushes out of the marriage hall while Sam shouts after her that they are a married couple now.

Later, Nayan comforts her family while Malti cries that they do not have a home now.

However, Sam comes there just then and tells them that they do have a home since what is his is Nayan's also from now on.

The family gets confused while Sam holds Nayan tightly and tells the Iyer family that they are married.

Malti gets shocked while Sam lies to them that he and Nayan fell in love with each other at Kiara's wedding and weaves a plausible lie.

The Iyer family gets trapped in Sam's lie while he also justifies the fight between him and Nayan by lying that they did the drama to ward off reporters.

The elders bless the couple while Nayan also plays along with Sam's lie for the sake of Malti's health.