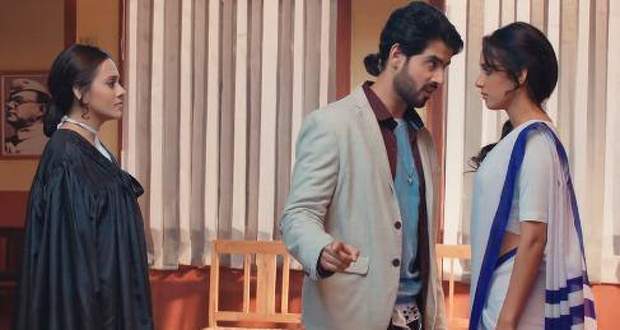 Later, Saransh tells Roohi that he has switched off Sharda’s phone while Roohi questions him about Rudra calling someone else number like Vaijayanti's.

Rudra calls Vaijayanti however, Roohi distracts her from picking up her phone while Saransh switches it off as well.

He also disconnects the landline to make it impossible for Rudra to contact anyone.

At the concert, investors are asking about Rudra who has yet to arrive, and reminding his secretary of the consequences.

In the meantime, Rudra’s car breaks down and he is roaming around looking for help and meets Diya (from YJJSN serial) who guides him towards a small hotel.

While going towards the hotel, Rudra tells her about his life's dilemma while Diya tries to reason with Rudra for thinking from Preesha’s perspective.

Afterward, Rudra’s secretary arrives at home looking for Rudra and tells Sharda of Rudra not reaching the concert.

Furious at Rudra for ditching the concert, Rudra's secretary berates his unprofessional behaviour and resigns from his job.

Rudra books a room for a night and ask to be taken to the restaurant while power shuts down due to load shedding.

Preesha calls Vaijayanti from her hotel telling her whereabouts and later goes to sleep in her room.

Later, Rudra goes to his room and coincidentally finds Preesha in his room.

Seeing Preesha there ignites his anger and he accuses her of following him.

However, Preesha has had enough and she also argues with Rudra and reminds him of his love for her.