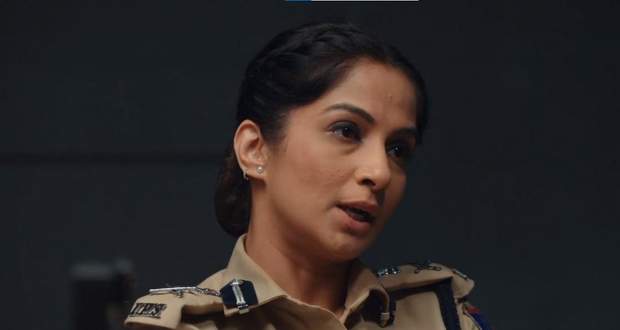 Today's Yeh Hai Chahatein 11th May 2022 episode starts with Revati taking Rudraksh under custody and arresting him under the obligation of killing Dev.

Further, Revati shows them another piece of evidence which is a button found in Dev's hand.

However, Preesha says that it is not Rudraksh's but Revati refuses to believe her and takes Rudraksh from there.

Elsewhere, Rakesh is with his mistress, Nalini, and tells her that they don't have to worry about Dev's murder anymore as Rudraksh is arrested revealing to the viewers that he is somehow connected to Dev's murder.

The next day, Preesha is pleading with Revati that Rudraksh is innocent while the forensic reports arrive.

The man informs that they can't pinpoint anyone as the print marks are faded due to finding the body very late.

Preesha says that it proves Rudraksh is innocent but Revati says that nothing is confirmed and sends her away.

Meanwhile, Nalini comes to Rakesh's home and informs him that she is pregnant.

However, Rakesh doesn't take the news very well and tells her to abort the baby revealing he doesn't love her.

Nalini threatens to expose him to the public but Rakesh reminds her what he did to Dev and kicks her out after giving her money for abortion and a jacket.

Later, Preesha is at a temple when she hears Nalini crying and sitting on the bench alone.

Preesha tries to console her while Nalini cries saying that the father of her unborn child has left her and doesn't want to support them.

Preesha offers to talk to the father of the child and convince him when Nalini goes a little ahead.

Just as Nalini is about to reveal Rakesh's name, a truck comes hits her and flees from there.

Preesha manages to click a picture of the truck's license plate and gives it to the police at the hospital while the nurse gives Nalini's belongings to Preesha.

Preesha notices a button missing from the jacket and realizes that it is the same as the one that Revati had shown them.

Preesha goes to jail to meet Rudraksh and informs him about her finding while he suggests she find Nalini's phone.