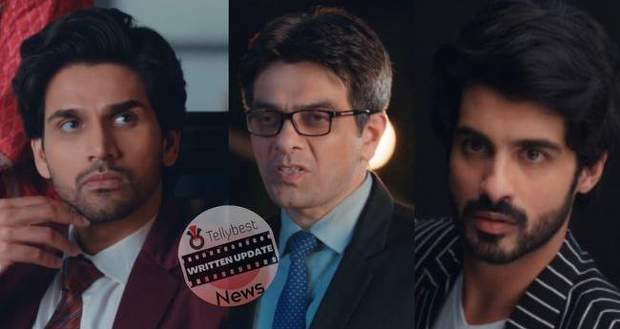 Today's Yeh Hai Chahatein 11th October 2022 episode starts with Vidyut asking Pihu why she didn't answer Raj back because if someone likes somebody, they just blurt it out.

Grabbing Pihu's shoulder, Vidyut asks her if she also feels something for him but Pihu asks him to shut up, stating even if he is the last person on the Earth, Pihu still wouldn't like him.

However, Vidyut knows Pihu is hiding from the truth.

At Thakur house, Preesha notices how sad Pihu looks but Pihu lies to Preesha saying she is just worried about a college project.

However, Pihu gets happy after Preesha tells her that her memories have returned.

Afterward, Preesha asks her if she is going to help the truth come out, instructing Pihu on how to trap Arman for the doctor's conference.

The next day, Pihu brings Arman & Preesha to her friend's birthday party but he understands that both have planned something for him and he is not stupid.

However, when all of them enter the banquet hall where the Doctor's conference is being held, Arman asks Pihu if all these old men are friends while she acts clueless.

Preesha asks Pihu if she is sure this is the banquet hall but Pihu later apologizes for bringing them as her friend's party is the next day.

Arman scolds Pihu for being a forgetful child and decides to go but the door of the banquet hall doesn't open.

Preesha asks Arman to calm down for a while and goes to a food counter to recognize the fraud doctor if he attends this doctor's conference.

Outside, Rudra worries that if no fraud doctor shows up, his & Preesha's plan might fail.

At the same time, Preesha prays that the fraud doctor shows up and tries to distract Arman with an orange drink.

Just then, Arman notices Dr. Gupta & stalks him which leads Arman to Rudra.

Rudra tries to play it cool but Arman knows Rudra is lying as he cannot get an invite to the doctor's conference.

Still in a wheelchair, Arman bribes the waiter to ask for the backdoor and catches how Preesha & Pihu's faces fall after he mentions Rudra.

Arman decides to leave angrily but gets recognized by the fraud doctor outside who says it is nice to see him again after a year.

Rudra gets curious while Arman plays innocent, stating he did not recognize the doctor.

Rudra nods at Pihu while Pihu drags Arman away from the confused fraud doctor who is curious as to why Arman didn't recognize him.

© Copyright tellybest.com, 2022, 2023. All Rights Reserved. Unauthorized use and/or duplication of any material from tellybest.com without written permission is strictly prohibited.
Cached Saved on: Monday 21st of November 2022 08:23:29 AMCached Disp on: Tuesday 29th of November 2022 12:42:28 AM