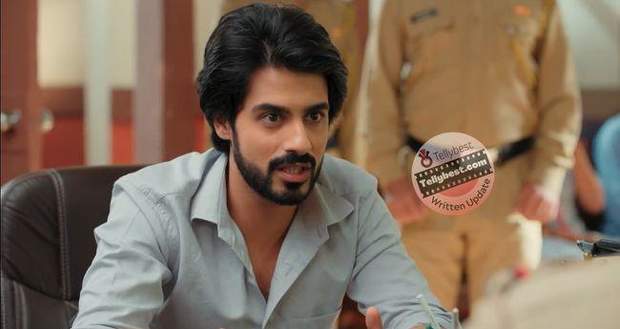 Today's Yeh Hai Chahatein 12th December 2022 episode starts with Preesha and Rudra asking who the real culprit in the Arman murder case is.

The police inspector declares that the murderer is Saaransh, and hearing this all of them stand up.

Rudra gets aggravated and questions the inspector about how dare he pull his child into this.

The inspector assures them that he has proof, earlier this morning a goat was anonymously sent to the police station with Armaan’s murder weapon.

The inspector orders the constable to get the weapon check and asks other police to get the CCTV footage.

The footage had no proof and the reports indicated that it was the murder weapon.

The police started to investigate who was behind sending the goat and after interrogating the local goat shed owner they came up with proof that Saaransh was the one who sent the weapon.

Rudra and Preesha try to defend Saaransh and the police get Saaransh into the station for interrogation.

So, Rudra and Preesha try to calm Saaransh and give him water then Saaransh starts to tell everyone what happened that night.

On the night of the murder, Ruhi wakes Saaransh and they decide to go to their old house so that they can bring their parents home.

Outside the house, Ruhi and Saaransh see that the gate is unlocked, the party is long over and the security guard is fast asleep.

Ruhi asks Saaransh if the party is over then where are Rudra and Preesha. Both of them were thinking and suddenly heard some noise and decided to hide.

They saw Gopal rushing out with blood on his shirt and he accidentally dropped a knife covered in blood.

He left the house and Ruhi and Saaransh followed him and saw that Preesha’s father burying the knife in the ground so they decided to leave this matter.

Presently, Saaransh says that he was scared that they will arrest Gopal so they didn’t tell this to anyone but Preesha wasn’t released.

So, in the morning, Saaransh decided to send the knife via a goat.

To avoid telling the truth to the police Saaransh decided to work for that goat shed owner. He took the goats and carefully wrapped the knife around his neck and then send it to the station.

Presently, Saaransh says that the goat did everything that he had hoped for as the police got the knife and the truth about Preesha’s father didn’t come out.

Saaransh panics and tries to prove his innocence and says that he is sorry for not telling them before.

At the same time, Ruhi and Sharda enter the station and Ruhi rushes to embrace her mother.

Then Ruhi asks Saaransh if he’s alright or not.

Meanwhile, Rudra asks Sharda why she got Ruhi to the station and she says that Ruhi was crying uncontrollably so Sharda had no choice.

© Copyright tellybest.com, 2022, 2023. All Rights Reserved. Unauthorized use and/or duplication of any material from tellybest.com without written permission is strictly prohibited.
Cached Saved on: Wednesday 25th of January 2023 02:31:51 PMCached Disp on: Tuesday 31st of January 2023 06:29:25 PM