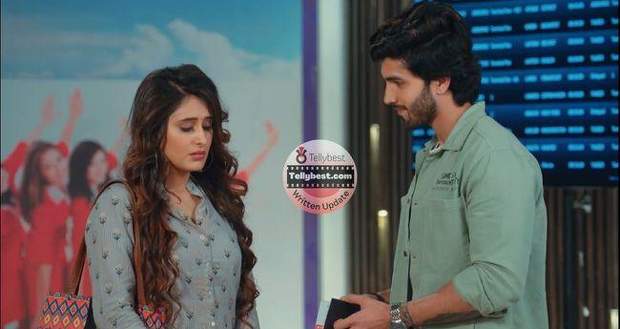 Today's Yeh Hai Chahatein 12th January 2023 episode starts with Sam taking the Iyer family with him while Mohit and Ishaani look on from afar.

On the other hand, Sam brings the Iyer family to the Khurana mansion and tells them to come inside while Nayan asks him when he bought the house.

Sam mocks her saying that he bought it after her telling him that Aliya needs a family who loves her.

As they all walk inside, Revati walks down the stairs and tells Sam that she was waiting for him.

Sam gets surprised to see her and asks her when she came there and Revatu reveals that she arrived just today.

Revati questions him about the other people while Sam asks her if she needs to be explained while pointing at the Nayan and his wedding attire.

He tells Revati that he and Nayan just got married a while back which leaves him in shock.

Revati demands he comes with her while Sam tells the servant to show the Iyer family their rooms.

Later, inside the room, Revati slaps Sam and rebukes him for marrying a stranger, and questions him about why he came to India.

Sam explains to Revati that he has to come with Alia to take care of her.

Revati gets angry with Sam for marrying some middle-class ugly girl while Sam reveals to her why he got married to Nayan.

Revati tells him that she does not feel good about Nayan and asks him if he knows what he is going to do next.

Sam tells Revati to not worry since he knows how he is going to make Nayan's night unforgettable.

Later, Sam comes to his room with a gift and demands she takes the gift while Nayan keeps on refusing and throws away the gift.

Sam gets angry at her and tells her to remember that he does not like hearing no.

He further gets back into his romantic room and tells her that he knows she is nervous about their first night together.

He further opens the gift to reveal a short red party dress and demands Nayan to wear it.

Further, Sam threatens Nayan of revealing everything to Malti if she does not wear the party dress.

Nayan begs him to not do this as her mother had a heart attack while Sam argues that his sister was just about to die because of him.

Nayan feels embarrassed as she picks up the dress and goes to change while Sam continues mocking her.

Outside the Khurana house, Ishaani gets angry and says that she will go and tell the truth to Sam while Mohit stops her.

He explains to her that Nayan is Sam's legally wedded wife and tells her that she should talk to Nayan before doing anything.

Meanwhile, Nayan washes her face to get rid of the tears and tells herself to be strong while Ishaani calls her.

Ishaani asks her how she is while Nayan tells her to not worry.

Ishaani cries feeling guilty while Nayan tells her to not do anything rash and listen to what Mohit tells her.

Afterward, Nayan changes into the red mini-dress and comes out of the bathroom feeling uncomfortable.

Sam tells Nayan that the dress won't get longer with her pulling it down and calls her sexy while pushing her back toward the wall.

Further, he traps her between his hands and locks her hands using handcuffs attached to the wall while she asks him what he is doing.

Sam laughs as he tells Nayan that she does not know the kind of hobbies and desires her husband has.

Nayan gets perplexed while Sam just laughs and tells her that she will be the one to fill those desires since she is his wife.

© Copyright tellybest.com, 2022, 2023. All Rights Reserved. Unauthorized use and/or duplication of any material from tellybest.com without written permission is strictly prohibited.
Cached Saved on: Wednesday 25th of January 2023 12:31:52 PMCached Disp on: Wednesday 1st of February 2023 09:35:03 PM