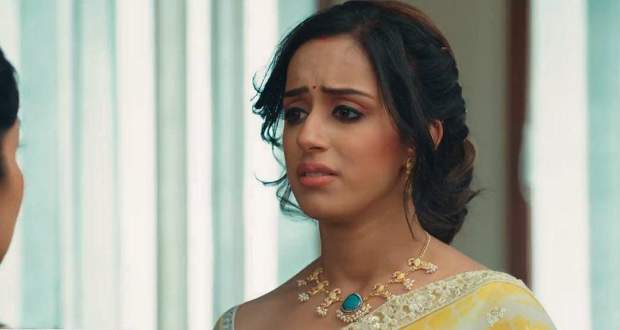 Today's Yeh Hai Chahatein 12th May 2022 episode starts with Preesha finding Nalini's mobile but could not find anything about Nalini's boyfriend.

Preesha answers Nalini's mother's call and goes to meet her.

She finds a newspaper and shows Rakesh's picture to Preesha, saying that he is Nalini's boyfriend. She says that she warned Nalini that Rakesh wouldn't leave his family for Nalini, but she didn't listen to her.

The police officer calls Preesha and asks her to visit them to state they found the truck driver.

After some time, Preesha reaches the police station while the truck driver apologizes.

Preesha wonders what would have happened if Rakesh had tried to kill Nalini.

Preesha meets Rudraksha and tells him what happened.

Rudra tells her that they don't have any evidence against Rakesh and asks her to visit the truck driver's family to find out what happened.

Rudra asks Preesha to take care of herself because he can't bear the guilt if anything happens to her.

Preesha gets the truck driver's address by tricking the police officer and goes to his house.

The nurse informs Preesha that they could not save Nalini.

Rakesh watches the media playing Nalini's report and fears the revelation of his lies.

Later, Rakesh creeps into the hospital to steal Nalini's DNA samples while Preesha catches him red-handed and reveals that it was a trap for him. She tells him that the truck driver's wife told her everything.

As she recalls, she confronted the truck driver's wife and discovered that Rakesh had hired a truck driver to kill Nalini.

Immediately, she alerts journalists to the hospital.

Meanwhile, Preesha calls Nalini when Rakesh says that she has no proof against him.