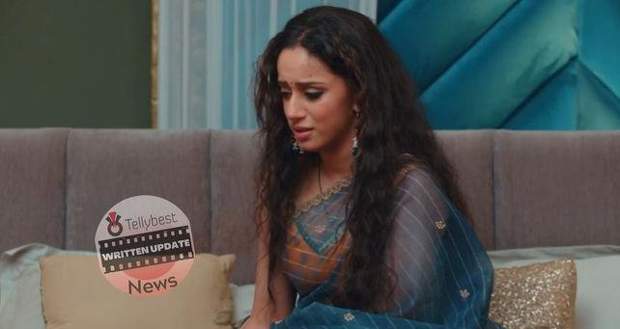 Today's Yeh Hai Chahatein 12th November 2022 episode starts with Preesha thinking that the kids are right and that she and Rudra are letting their egos get in between their love.

Preesha thinks that she loves Rudra and needs to tell him why she married Armaan.

On the other hand, Rudra also thinks that the kids are right and that Preesha must have a reason for marrying Armaan.

However, Pihu overhears Rudra's decision to confess his love for Preesha and forms a plan to prevent him from confessing to Preesha.

Further, Pihu calls Digvijay into her room and tells him that the kids have convinced Preesha and Rudra to talk to each other and resolve their misunderstandings.

Digvijay forms a plan and tells Pihu to handle Preesha while he handles Rudra.

Digvijay takes a glass of juice and goes to Rudra's room where he dumps the juice on him and pushes him into the bathroom to take a shower and change.

Meanwhile, Pihu locks Preesha's door from outside and then goes to Armaan with a jar of jam.

She tells Armaan that it is tastier if they eat it with their fingers.

Armaan gets excited like a child and tells her that he wants to show it to Preesha too.

Pihu opens the door while Armaan rushes to Preesha and starts feeding her the jam using his fingers while she tries to stop him.

She messages Digvijay and he starts coming toward Preesha's room with Rudra.

Pihu sees them coming toward Preesha's room and pushes Armaan which leads to him and Preesha both falling on the bed.

Rudra and Digvijay come there at the same time while Pihu runs away from there.

Rudra feels heartbroken as he thinks that Preesha and Armaan are kissing while Digvijay insinuates that the two have already consummated their marriage before Armaan became childlike.

Preesha finally manages to get Armaan away from her while her cheek and face are also smeared with the jam from Armaan's face.

Rudra once again misunderstands and angrily tells Preesha that he saw what needed to be seen and leaves.

Preesha goes to the mirror and realizes that Rudra must have misunderstood and rushes to clarify the situation to him.

However, Pihu manages to halt her when they both hear Rudra making an announcement.

The kid, Preesha, Pihu, and everyone reach the hall while Rudra announces that there will be no functions and the wedding.

Everyone gets shocked when Rudra says that he is canceling all the functions and the marriage as all the hindrances and the stoppings in the marriage have made him realize that he does not love Pihu.

© Copyright tellybest.com, 2022, 2023. All Rights Reserved. Unauthorized use and/or duplication of any material from tellybest.com without written permission is strictly prohibited.
Cached Saved on: Monday 21st of November 2022 01:57:30 AMCached Disp on: Tuesday 29th of November 2022 12:24:05 AM