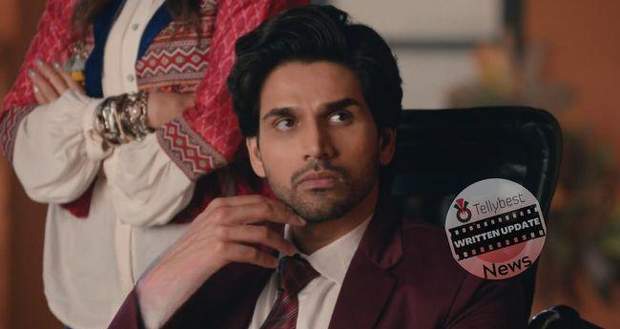 Today's Yeh Hai Chahatein 12th October 2022 episode starts with Rudra asking Arman's doctor where he wants to go while Arman's doctor says he is looking for the way to go to the conference room.

However, Rudra brings him to a separate room and asks if he remembers Preesha.

Rudra glares at the doctor and asks him to spill every detail of how he erased Preesha's memories while the fraud doctor finally understands why Arman didn't recognize him and plays innocently.

However, Rudra grabs his collar and screams at him, to tell the truth.

Rudra states that he won't spare the doctor and will punish him for his wrong actions but Arman's doctor pretends to be oblivious.

Stating that he has done a big medical fraud, Rudra warns Arman's doctor that if he doesn't tell him the truth, his family will have to suffer.

Grabbing the doctor's collar again, Rudra shouts at him, stating he will ruin both his career & family life.

However, the doctor begins to run away, making Rudra angrier.

Rudra then slaps the doctor and ties him to a chair.

Preesha then calls Rudra who tells her that he has held Arman's doctor hostage.

Afterward, Arman tells Digvijay about Preesha & Pihu lying to him about going to a conference & Arman suspects Preesha of regaining her memories.

Digvijay asks Arman if the doctor came and Arman nods and gets frustrated at his legs not working.

Just then, Digvijay tells Arman that his legs are working fine since Preesha is giving Arman a nerve-numbing injection that he found in her room.

Arman gets angry and realizes that the hot oil massage is nothing but Rudra & Preesha's plan to torture him.

At night, Preesha gives the injection to Arman but Digvijay changes it with an injection of the multivitamin.

Afterward, Arman can walk on his legs with Digvijay's support.

Meanwhile, Rudra tries to instigate Arman's doctor to spell out the truth while Arman & Chacha Ji reaches their room.

At the same time, Rudra shows Arman's doctor his wife who is kept hostage by Vidyut with a gun pointed at her so he starts speaking the truth quickly.

Arman's doctor asks Rudra to let go of his wife and confesses to his sins about helping Arman erase Preesha's memories while Rudra starts the recorder.

© Copyright tellybest.com, 2022, 2023. All Rights Reserved. Unauthorized use and/or duplication of any material from tellybest.com without written permission is strictly prohibited.
Cached Saved on: Monday 21st of November 2022 07:00:49 PMCached Disp on: Friday 9th of December 2022 03:45:24 AM