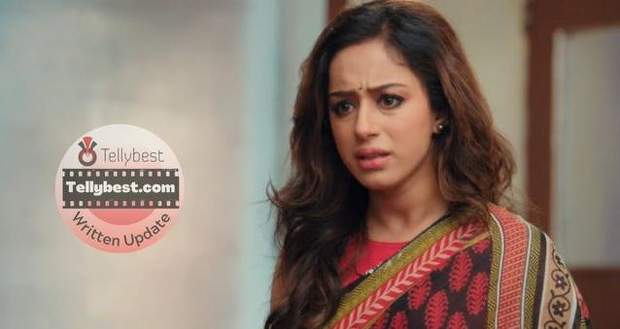 Ruhi tells how she was hungry and took Sharda’s phone and called Gopal and told him everything.

Hearing this Gopal said that he will fly to Delhi on the first flight.

Presently, Preesha and Rudra tell Ruhi that it’s not her fault that things turned out like this and they wonder where Gopal went.

The police inspector butts in and tells them that the police will find Gopal as he had the motive to kill Arman.

Rudra then points out that Gopal is a retired judge and people often swear upon his honesty.

Hearing this the inspector says that Gopal has taken the law in his hand therefore he must pay the price.

Further, the inspector tells the constable to circulate Gopal’s photo in every station.

Meanwhile, the forensic reports tell that there are fingerprints of Gopal on the knife.

After watching the news, the City Hospital nurse calls the police and informs them that Gopal is admitted there.

Later, at the hospital, the nurse tells that Gopal was in an accident three days ago and has not woken since the treatment.

Meanwhile, seeing Gopal in that condition Preesha tells him to wake up and prove his innocence to the Police and a tear drops on his hand giving him a jolt.

Gopal wakes up and the doctor checks on him and declares him to be fine.

So the police start with their interrogation and Gopal starts to explain whatever happened that night.

Gopal says that he went to Preesha’s old house and saw the guard so he decided to climb a wall and enter the house.

Further, he saw Armaan taking his last breath and Armaan asked him to remove the dagger from his stomach, Gopal took it out and Arman died then and there.

So Gopal got scared because his fingers are on the knife so he decided to leave the house and buried the knife.

Presently, the inspector says that Gopal is making up stories and he should just confess.

Gopal says that he thought about it and decided to go to the police thinking that the knife will be the only proof needed to provide Preesha’s innocence.

Later, as he was coming to the station a car deliberately hit him and ran away.

Presently, the inspector says that Preesha and Gopal are still the prime suspects.

The police speculate that Gopal saw Preesha murdering so he took off with the knife.

Further, the inspector says that Preesha and Gopal are the two prime suspects in the Arman murder case, and this renders the room speechless.

Later at the station, Gopal is brought in handcuffs and officially is the prime suspect with Preesha.