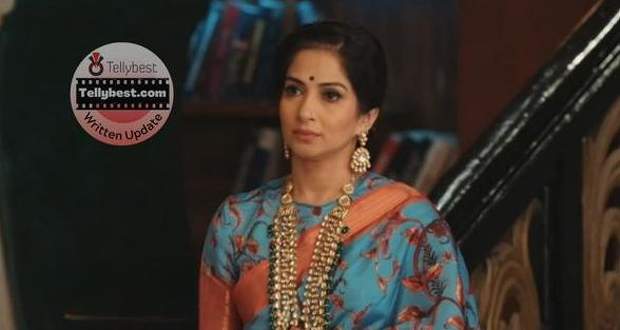 Today's Yeh Hai Chahatein 13th January 2023 episode starts with Sam telling Nayan that he's going to take everything from her and putting an apple on top of her head while he goes to sit on the cushioned table in front of her.

He tells her that his hobbies are different and removes the clothes from the table in front of him.

The flower petals fall on Nayan and she gets shocked to see throwing knives arranged on the table.

Sam laughs seeing her reaction and tells her that he wants to try his hands at her.

He continues throwing knives at her while she gets scared and closes her eyes.

He finally targets the apple and throws a knife through it while Nayan's eyes are closed.

She gets relieved when Sam tells her that the apple was not the real target.

Nayan gets anxious as Sam takes another knife and points it at her.

He throws the knife which cuts the straps holding up the dress and makes the whole dress fall on the ground.

Nayan looks down to the ground in shame while Sam turns away with the excuse that she is not even worthy of him looking at her body.

Sam further takes the bottle of alcohol and falls unconscious while Nayan manages to free herself and says that she will do what her parents taught her now.

The next morning, Sam wakes up and gets shocked to see his long hair missing with a bird's nest hairstyle.

He shouts in anger while Nayan comes there and laughs at him.

He gets violent with her for ruining his image while Nayan tells him that he played with her self-respect the previous night and now she will do the same.

She records him fighting with her and tells him that she will post it on social media to ruin his whole career.

Meanwhile, at the breakfast table, Malti and Patti talk to Revati and give her a small piece of jewelry as a shagun.

However, Revati throws away the jewelry and rebukes them for trying to match their richness and their class.

Nayan speaks up when Sam comes there just then and taunts Nayan by calling her a rat and telling Alia that a rat tries to ruin his image by cutting his hair.

However, he got his hair done by his stylist and Alia tells him that he has turned even more handsome.

Sam further jokingly scolds Revati for insulting his in-laws and tells the Iyer family that they can leave rest fully in the house.

However, he knows that they won't eat from their daughter's house due to their values and others things so he is going to solve that too.

Sam lays off all the guests and tells the Iyer family that they can work in the house and 'earn' their food.

Malti fears Nayan and Sam's marriage breaking and agrees after which she takes Nayan to the room and questions her.

Nayan thinks of an excuse to tell Malti while Ishaani enters the room through the window.

She tells Nayan that she cannot see her being tortured anymore and reveals the whole truth to Malti.

Malti asks Nayan why she didn't reveal the truth to Sam and Nayan reveals that she was scared for Ishaani's safety.

Malti sits on the couch in worry while Nayan tells her that they will also escape from there once Mohit and Ishaani leave.

Ishaani informs Nayan that Mohit has also come to talk to Sam which shocks her.

Nayan runs to stop Mohit and tells him that he should have left without informing anyone.

Mohit tells her to not worry since Sam thinks that he has done the worst thing already by marrying the love of his life, I.e. her in his eyes.

© Copyright tellybest.com, 2022, 2023. All Rights Reserved. Unauthorized use and/or duplication of any material from tellybest.com without written permission is strictly prohibited.
Cached Saved on: Wednesday 25th of January 2023 11:16:08 AMCached Disp on: Monday 6th of February 2023 06:02:49 AM