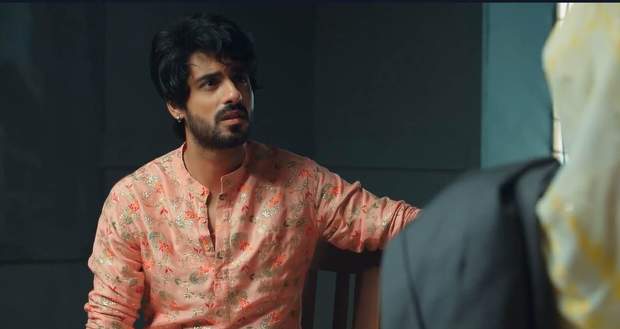 Rakesh is shocked to see Nalini alive as he had ordered one of his men to kill Nalini with a truck.

Preesha announces that it is either Nalini or Rakesh who has killed Dev.

However, Rakesh refutes killing his own son.

Preesha shows them a button as evidence that was found in Dev’s hands after he died with which she will soon find out who killed Dev.

Two months ago, Dev had caught Rakesh and Nalini together red-handed and started blackmailing Rakesh for money.

The blackmailing grew more and more until one day, Dev harassed Nalini and she slapped him.

Dev got slapped by Rakesh too which made Dev decide to reveal the truth about Rakesh’s affair to Revati.

When Dev was in the hospital, Rakesh requested him again not to say anything to Revati or leak his pictures with Nalini.

However, Dev was keen and would not be stopped by anyone.

He escaped the hospital to tell Revati all about Rakesh’s illicit affair during the Annual Function at Khurana School.

Unfortunately, Dev was found wounded outside the school with blood oozing out of his head, frightening Rakesh.

Even then Dev blackmailed Rakesh to save him otherwise he’d reveal his truth.

Instead of saving Dev, Rakesh suffocated Dev to death with his hands as he did not want to live in constant fear.

All this while, Preesha records Rakesh’s statement and tells him he will rot in jail.

However, Rakesh isn’t afraid and aims his gun at Preesha, demanding she gives him the recorder.

Preesha staggers back fearfully until Revati walks inside and aims her gun at Rakesh.

Revati arrests Rakesh, saving both Nalini and Preesha from getting killed by his evil hands.