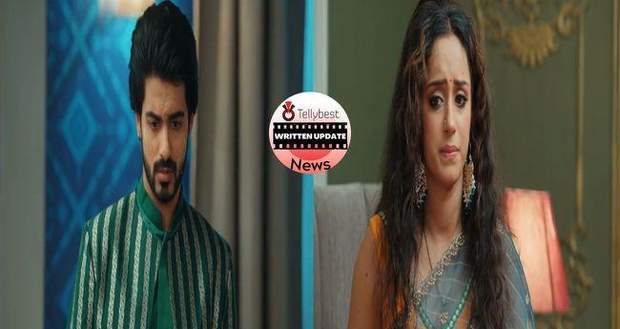 Today's Yeh Hai Chahatein 13th November 2022 episode starts with Saaransh and Roohi getting happy thinking that Rudraksh is breaking his marriage with Pihu.

However, Rudraksh announces that he cannot wait for Pihu anymore and is going to marry her at a court the next day only.

Rudraksh tells the guests to attend the party after the marriage and give their blessings before leaving.

Preesha thinks that Rudra did wrong by announcing the marriage and not giving her a chance to say her the truth.

Later, Preesha is pacing in her room while Saaransh comes there and questions her.

However, Preesha says that she did not get a chance to talk to Rudra.

He asks her if she did not tell Rudra how much she loves him and why she married Armaan.

Preesha reveals to him the incidents leading up to the announcement while Saaransh gets upset due to Rudra always misunderstanding and taking such big steps.

The mother-son duo go to Rudra's room with the determination to tell him the truth when they find the room empty.

On the other hand, Rudra and Pihu are in the car driving somewhere while she apologizes to him for making her drive out there for her ice cream craving.

Rudra recalls how Preesha also used to have cravings for Pani Puri when she was pregnant.

Elsewhere, Sharda comes to Rudra's room and questions Preesha and Saaransh after seeing them in the room.

Saaransh asks her about Rudra's whereabouts and she informs them that Rudra has gone out with Pihu.

Saaransh and Preesha decide to stay in the room for Rudra.

On the other hand, Pihu tells Rudra that they are near her house and requests him to take her there.

However, once they are at Digvijay's house, Pihu signals Digvijay and he leaves the room.

Flashback shows Pihu and Digvijay planning to keep Rudra out of the Khurana house until the marriage happens so that the kids and Preesha cannot do anything.

Digvijay makes Rudra sit and tells him that he wants Pihu to say with him before the marriage as per the traditions.

Pihu comes there just then and takes Rudra to the side telling him that she can't stay with Digvijay.

Rudra gets confused while Pihu tells him that she has morning sickness and that she doesn't want her father to know about her pregnancy yet.

Pihu suggests Rudra stay with Digvijay while she returns to Khurana's house and Rudra agrees.

Pihu returns to Khurana's house and berates Preesha after seeing her in Rudra's room.

Preesha asks about Rudra while Pihu tells him that he is not returning since he doesn't want to see Preesha's face.

Preesha and Saaransh leave the room while Preesha states that she will talk to Rudra at court and will reveal the truth to him.

The next morning, Preesha walks towards the main door while she bumps into Pihu who is in her bridal dress.

Pihu insults her and tells her to get the Aarti ready as she is going to return as Mrs. Pihu Rudraksh Khurana.

Pihu and Sharda leave while Roohi tells Preesha that she could not do anything for both her children or her love.

Preesha tries to talk while Roohi tells her that she took both her father and her mother away from her and has made the kids alone.

Roohi leaves from there without looking back while Preesha rushes to the car and tells the driver to take her to the court.

On the other hand, Rudra also recalls his moments with Preesha while he gets ready in a white Shervani.

Rudra thinks that he cannot leave Pihu while she is pregnant with Vidyut's child and convinces himself to marry Pihu.

Digvijay comes there just then and tells Rudra that they have to leave now.

© Copyright tellybest.com, 2022, 2023. All Rights Reserved. Unauthorized use and/or duplication of any material from tellybest.com without written permission is strictly prohibited.
Cached Saved on: Monday 21st of November 2022 06:42:26 AMCached Disp on: Monday 5th of December 2022 01:17:33 AM