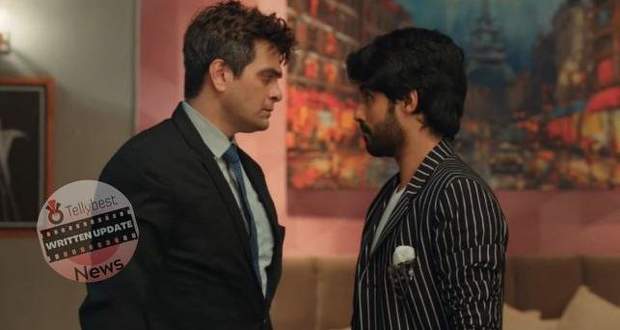 He then reveals that he also gave Arman medicines to erase Preesha's memories while an angry Rudra asks the reason behind Preesha's panic attacks upon seeing him.

Arman's doctor then states that Arman started making fake videos and morphing Rudra & Preesha's faces onto it so Preesha believes that Rudra was a wife beater.

However, when Vidyut pulls the trigger, there is no bullet as the gun is empty and Arman's doctor gets relieved.

Rudra cuts the call and asks Vidyut to leave while Arman asks the waiter to make Rudra's room open by bribing him.

However, Rudra does not open the room and Arman asks for the master key.

Just when Rudra stuffs Dr. Sharma's mouth with a hankie, Arman barges inside the room.

Rudra gets shocked to see Arman walk on his legs while Arman states that he knows about Preesha's memories returning.

Meanwhile, Preesha worries about Rudra who is stuck with Arman & tries to punch Rudra.

However, Arman weighs more on Rudra's strength after he kicks him in the gut while Digvijay frees up Dr. Sharma.

Rudra fights with Arman and pushes Digvijay all alone and picks up a flower pot.

However, Arman shows him a gun & Digvijay ties Rudra's hand and takes him to an abandoned warehouse.

Tying Rudra to a chair, Arman punches him continuously, taking all his anger out.

Asking Dr. Sharma to leave the town, Arman then turns toward a fearless Rudra who is not scared.

However, Arman punches Rudra in the stomach continuously while he can only laugh and states that Preesha only has hatred left for Arman.

Rudra gets unconscious after receiving the punches while Digvijay tries to calm down an angry Arman.

At Thakur House, Digvijay scolds Arman not to walk in front of Preesha & continue his act.

The next day, Pihu's morphed pictures wearing a bikini is made fun of in the classroom while she calls everyone a 'pervert' & laughing at her expense.

The boy whose phone was broken by Pihu claims that he did this and Vidyut comes just in time to thrash him publicly.

Pihu takes over and slaps the guy while also scolding Vidyut for fighting on her behalf.

Vidyut says he is also sorry for his past actions but Pihu doesn't believe him.

Meanwhile, Arman notices Preesha's upset face when she comes to give him his tea.

© Copyright tellybest.com, 2022, 2023. All Rights Reserved. Unauthorized use and/or duplication of any material from tellybest.com without written permission is strictly prohibited.
Cached Saved on: Monday 21st of November 2022 01:31:12 AMCached Disp on: Friday 9th of December 2022 04:26:09 AM