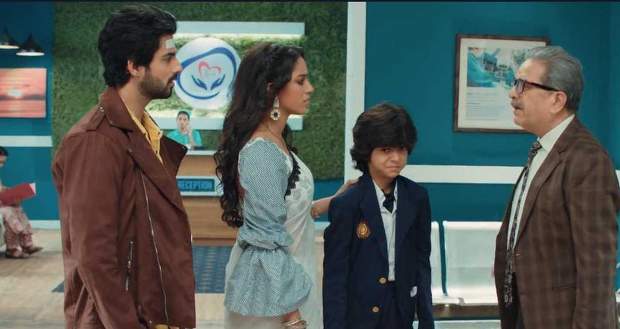 However, Preesha and Rudraksh start apologising to Revati and request her to not send Saaransh to jail.

The police are taking Saaransh away while a nurse comes there and tells everyone that Dev is calling them to his room.

Inside the hospital room, Dev acts nice in front of everyone and tells Revati that he forgives Saaransh for his mistake shocking everyone.

Revati feels grateful for such a forgiving child and tells the police officer to leave as Dev doesn't want to file a complaint.

Saaransh, Preesha and Rudraksh talk and decide to talk to Alia wondering why she didn't do anything.

At the same time, Yuvraj is disguised as a ward boy and decides to talk to Preesha noticing them.

Preesha, Rudraksh and Saransh talk to Alia and learn that Revati is a heart patient and that Dev is using the diagnoses against her.

Later, Yuvraj manages to separate Preesha and Rudraksh by making the public notice Rudraksh and surround him.

Preesha reaches home while Yuvraj stops her in the parking lot and starts telling her that he knows she loves him.

Yuvraj notices Rudraksh coming toward them and tells Preesha that she didn't reveal to Rudraksh about him being the murderer of Rajiv because she still loves him.

Rudraksh comes there and starts attacking Yuvraj creating a fight.

However, Yuvraj manages to run away from there after which Rudraksh rebukes Preesha for lying to him and betraying him.