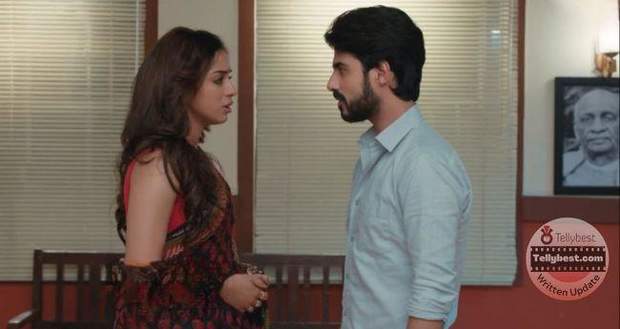 Today's Yeh Hai Chahatein 14th December 2022 episode starts with the police blaming Preesha and Gopal as Armaan’s murderers and releasing Digvijay as he was spotted in an ATM.

Pihu and Vidyuth try to defend Preesha and Gopal but the inspector tells them to keep quiet and asks the suspects to be taken to the cell.

Hearing this Preesha pleads to get two minutes with Rudra.

Outside, Preesha tells Rudra that the killer knows Armaan very well and he must have called before coming so Rudra should check Arman’s call records.

Rudra promises Preesha that he will find the killer.

The next morning, Rudra goes to the station and asks the inspector if he checked the call records or not.

The inspector gets offended and tells Rudra that they have checked and found nothing so Rudra should leave.

Outside the station, Rudra thinks of an idea and calls a hacker to find the call logs and meets the hacker in his office.

The hacker provides the call logs to Rudra and says that it was really hard to find.

Rudra thanks him and call the 3 unknown numbers. The first two numbers were useless but the third unknown number was of a driver who was instructed to pick Arman up from his house at 3 AM but he slept through it and didn’t pick Arman up.

Later the driver called but no one picked up the call so he forgot about it.

Rudra wonders why Armaan would take a taxi when he has so many cars so Rudra asks the driver about the location.

The driver informs Rudra that he had to drop Arman at a Blue diamond hotel.

Later, Rudra goes to the hotel so that he can find some clues and there finding a familiar face he follows her and knocks at her door.

It is Revati who opens the door and is surprised to see Rudra, in anger Rudra accuses her so she tries to shut the door but Rudra forces himself into the room.

Enraged Rudra starts to accuse Revati and tells her that her time is up if she doesn’t give him his baby.

Revati tells him that she has nothing to do with Arman’s murder and asks him to leave her alone as she did not take his baby.

Then, Rudra grabs her throat and tells her that her drama will not work in front of him.

Revati pushes Rudra away and denies all the accusations and threatens to call security.

So he goes away and sees her phone and forces her to open it.

On the phone, there are call logs with Arman’s name on it so Rudra tells her that now she will face the trials.

Meanwhile, the police come with Preesha and barge into Revati’s room. Preesha slaps Revati and tells her to give her baby to Preesha.

Revati spills the truth and says that this was Armaan’s plan and she doesn’t have any baby.

After a lot of guilt trips, Revati confesses that she killed Armaan.

© Copyright tellybest.com, 2022, 2023. All Rights Reserved. Unauthorized use and/or duplication of any material from tellybest.com without written permission is strictly prohibited.
Cached Saved on: Wednesday 25th of January 2023 05:28:06 PMCached Disp on: Monday 6th of February 2023 02:44:27 AM