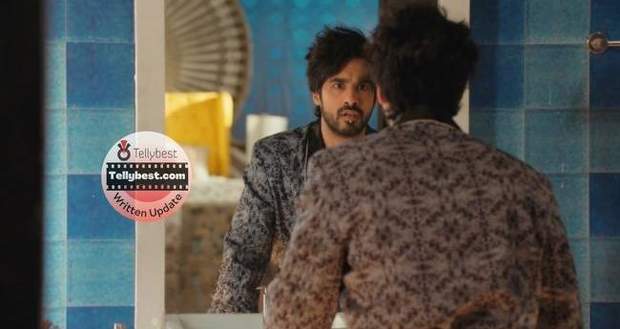 Today's Yeh Hai Chahatein 14th January 2023 episode starts with Mohit going to Sam's room while Sam asks him what he is doing there after ruining his life and breaking Alia's heart.

Mohit tells him that he doesn't think they can work together while Sam mocks him saying that he was working under him, not with him.

Nayan comes there just then and Sam holds her tight to him to make Mohit jealous.

Mohit acts jealous and leaves saying that he is going to return to London.

Further, Sam drags Nayan to one of his meetings and insults her in front of everyone by telling her to tie his shoelaces.

He demands she gets him a coffee but she refuses saying that he already has a coffee.

He throws away the coffee and gives Nayan the empty cup while threatening her of revealing the truth to Malti and risking her having a heart attack.

Nayan makes coffee for Sam unwillingly and even does his massage.

However, he gets a call from someone important and goes to attend it while one of the investors starts misbehaving with her.

Sam comes back and starts beating up the investor while telling him to not even think about misbehaving with his wife.

He kicks out the investors while the harasser continues threatening Sam while saying that he is going to take revenge.

Nayan questions Sam as to why he helped her and Sam tells her to not be mistaken and that he was worried about her.

He gets his face very close to Nayan and tells her that he owns her and doesn't want anyone messing with his toys.

He leaves while Nayan thinks that she has to handle him till night only.

At night, Nayan and the Iyer family try to escape while Chintu accidentally knocks over a vase.

They hide as Sam hears the noise and comes to check what made the noise but doesn't find anything.

Further, they meet up with Mohit and Ishaani outside and reach the airport.

However, when he goes to check in, the lady tells him he cannot fly out of the country with a ripped passport and has to make a new passport.

He informs the Iyer family about it while Nayan asks him if it could be Sam's doing.

Sam reveals himself just then and informs them that his wife is correct about him being the one behind the ripped passport.

He taunts Mohit and Nayan saying that he had overheard their plan and had formed a plan of his own.

Sam recalls how he has booked a room in the same hotel as Mohit and had convinced a fan servant to use the MasterCard to get Mohit's passport from his room.

Back in the present, Mohit and the Iyer family are shocked at Sam's actions while Ishaani comes forward and starts arguing with Sam.

She tells him that she thought he was a good man while Sam retorts that she is not that good either since she is helping Mohit and Nayan escape.

Sam threatens her saying that anyone who broke his sister Alia's heart will not get their love also.

© Copyright tellybest.com, 2022, 2023. All Rights Reserved. Unauthorized use and/or duplication of any material from tellybest.com without written permission is strictly prohibited.
Cached Saved on: Wednesday 25th of January 2023 09:00:41 AMCached Disp on: Sunday 5th of February 2023 02:53:00 AM