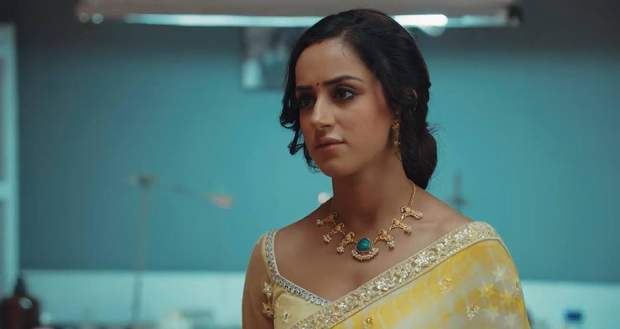 Revati informs that she has sent Alia to her grandparent’s home as she is too shocked by what has happened.

Meanwhile, Preesha sympathizes as Revati talks about being alone in the same house that once was a source of her happiness will now remind her of great pain.

At dinner, Rudra asks Saaransh whether his sessions with the therapist are making him feel better or not.

On the other hand, Revati cries alone, looking at Dev’s photograph.

Finding herself totally alone, Revati decides to cut her wrist and falls unconscious on her bed as the blood oozes out from her wrist.

Rudra receives a call from the hospital about Revati’s condition and he rushes to see Revati along with Preesha.

As Revati comes awake and cries, Preesha suggests that she stays with them at Khurana's house.

However, Preesha and Rudra have no idea that Revati is acting and all she wants to do is ruin their family, just like her family has been ruined now.

Later, Roohi tells her parents that she wants to see them get married again.

When alone, Rudra tells Preesha he denied Roohi's request because to fulfill it, he will have to be close to Preesha which he does not want to.

Revati hears their conversation and decides to order a cake prior to the wedding anniversary for Preesha under Rudra's name.

Rudra is shocked as he knows he has not ordered the cake.

However, Revati pulls both Preesha and Rudra to one side and explains she ordered the cake after she eavesdropped on their conversation.

Talking about the uncertainty of tomorrow, Revati makes Rudra realize his futile anger which leads to Rudra apologizing to Roohi and agreeing to re-marry Preesha just like Roohi wants.

However, this good act is just Revati's first step to creating more misunderstandings between #RuSha.