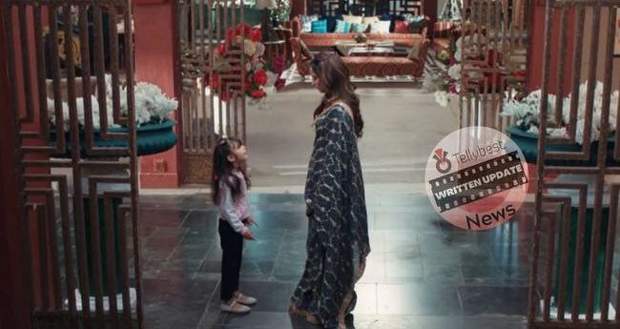 Today's Yeh Hai Chahatein 14th November 2022 episode starts with Pihu calling Digvijay and asking him if they have left for court.

Digvijay tells her that they are leaving soon and reminds her about Preesha.

Digvijay says that if Preesha reaches the court, she will stop the marriage anyhow.

Pihu smirks as she says that she has handled Preesha.

Back in present, Digvijay praises her after which he disconnects the call to go to the court.

Meanwhile, Preesha's car gets punctured and the driver tells her that he will hail a taxi for her.

However, none of the taxis stop and Preesha gets worried when Saaransh comes there in a taxi.

Preesha asks him how he knew she was in trouble and he tells her that he just had a feeling and came to help her.

Saaransh recalls how Pihu was feeling upset about Preesha not doing anything to stop Rudra and Pihu's marriage.

Saaransh consoles her as he reveals how Preesha has gone to stop the marriage and that he's going too.

Back in the present, Preesha calls Saaransh a blessing as she climbs in the taxi with him to go to court.

Later, Pihu sees Preesha entering the court and goes while making up an excuse to Sharda.

However, Preesha insists on talking to Rudra at least once before he gets married.

Pihu refuses and asks for a reason while Preesha says that Rudra loves her.

Preesha tells her that she'll be unhappy staying in a loveless marriage.

However, Pihu says that Rudra doesn't love Preesha and faints suddenly while saying that she will not let her take away Rudra as she took away Vidyut.

Preesha checks her nerves and gets shocked while she checks Pihu's stomach.

Pihu wakes up after drinking water and asks what happened.

Preesha asks her if she's pregnant while Pihu acts guilty and tells her that she and Rudra had consummated their relationship while trying to help each other get out of their sorrows.

Preesha believes Pihu and tells her that she will let them get married without becoming a hindrance and stays in the hall as Pihu leaves.

Saaransh comes there and asks Preesha what happened and she says that everything is over as Rudra loves Pihu now.

Meanwhile, in the registrar's office, everything is normal as they don't know about Preesha's arrival.

The registration of their marriage starts as they are told to exchange garlands and sign the official register.

Rudra's hand shakes as he holds up the pen and recalls his marriage with Preesha and the recent events leading up to this marriage.

Pihu asks him if he is alright while Rudra says that everything is alright.

Back at the Khurana house, Saaransh insists Preesha tell him why she didn't talk to Rudra and turned back only after talking to Pihu.

Preesha says that she cannot tell him but the marriage was bound to happen.

Roohi overheard them and starts demanding Preesha saying that she has made her parentless.

However, Rudra comes there just then and tells her that her father is still there.

© Copyright tellybest.com, 2022, 2023. All Rights Reserved. Unauthorized use and/or duplication of any material from tellybest.com without written permission is strictly prohibited.
Cached Saved on: Monday 21st of November 2022 06:28:53 AMCached Disp on: Friday 9th of December 2022 04:12:28 AM