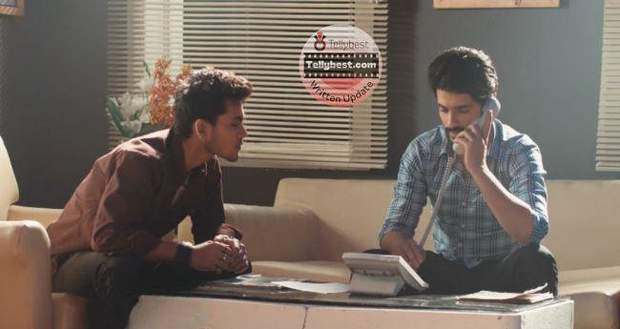 Today's Yeh Hai Chahatein 15th December 2022 episode starts with Rudra telling the inspector to arrest Revati and she admits that she murdered Armaan.

She tells the police that she killed Arman in self-defense as Arman was going to kill her.

Hearing this, Rudra questions Revati if this was all in self-defense they why didn’t she report it to the police.

Revati says that she was afraid to be convicted while Rudra tells the inspector that Gopal and Preesha are innocent and they should arrest Revati.

The police inspector nods and says that Gopal will be released and orders a lady constable to arrest Revati instead.

Tears fill Preesha’s eyes while Rudra embraces her in a hug.

Meanwhile, Revati recalls what really happened that night in the police vehicle as she gets transported to jail.

She recalls getting a call from Arman and he said that he wants Preesha’s baby and for that, he is willing to give 100 crores for the negotiation.

Revati told him to meet at the hotel at 4 AM and said to herself that she knows Arman from head to toe and will end his chapter.

Later, she barged into his room in a different attire and shocked him while Armaan asked her why is she dressed like that and why is she there.

Very cleverly, Revati replied that she needed to see the 100 crores before handing him the baby.

Then, Arman questioned her about where is the baby and she said it was in the hotel.

Armaan turned to put on his coat while Revati was ready with the knife and as soon as he turned around, she stabbed him.

Shocked and in pain, Armaan fell to the ground and then asked her why did she do this.

Revati told him that he would have killed her so she killed him first, also saying that to extract her revenge, Rudra and Preesha will have to live in the agony of child loss.

The recollection of Arman's murder ends, and Revati smirks, remembering how she saw Rudra in the lobby and planned this all.

In a flashback, Revati remembers bribing one of the police who is in the trailer with her currently.

Meanwhile, at the police station, Gopal and Preesha are released and Revati will pay for her crimes.

Revati thinks that she will burn RuSha to the ground very soon as they leave.

At their home, Sharda is shocked by Revati's revelation, and asks Rudra & Preesha to start their life afresh.

Further, Digvijay apologizes and gives them all they lost due to Armaan’s treachery while Pihu smiles to herself, thinking everything is going to be alright now.

Rudra sees Preesha's confused expression and asks her if she is happy or not.

Preesha tells him that she is worried about their baby so Rudra promises that he will find their child no matter what.

Seeing Rudra care for Preesha so gently, Gopal is filled with contentment and relief.

However, Preesha remembers how Revati was smiling at the police station and feels a chill down her spine, and thinks something bad is coming their way.

© Copyright tellybest.com, 2022, 2023. All Rights Reserved. Unauthorized use and/or duplication of any material from tellybest.com without written permission is strictly prohibited.
Cached Saved on: Wednesday 25th of January 2023 12:02:54 PMCached Disp on: Tuesday 31st of January 2023 06:15:11 PM