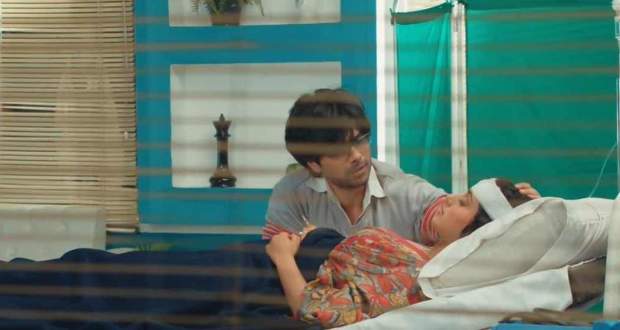 On the other hand, Roohi and Rudra are seen together. Roohi tucks her chin down in sadness. She makes Rudra remember the time they spent together.

Roohi makes him feel guilty about the fact that he was going to Delhi without seeing her one last time.

At the same time, Rudra gets down on his knees. He embraces Roohi and apologies.

Meanwhile, Bunty can’t help but grimace. He wants Rudra to know the truth but at the same time, he does not want to be the one to tell him.

Consequently, Sachi tells Roohi that Preesha is in the hospital.

Bunty and Rudra take Roohi and Sachi to see Preesha.

Bunty suggests Rudra cover his face so no one in the hospital recognizes him as a rockstar.

At the hospital, Yuvraj ruminates. He does not want Preesha and Rudra to reunite.

Otherwise, it will be his loss.

Upon gaining consciousness, Preesha corrects the nurse. She tells her that Yuvraj isn’t her husband.

Roohi along with Bunty visits Preesha.

However, Preesha cries alone and talks to herself.

Her love for Rudra is so much but she cannot muster up the courage to see him again.

Preesha asks herself how does she stop herself from meeting him if he keeps showing up?

© Copyright tellybest.com, 2020, 2021. All Rights Reserved. Unauthorized use and/or duplication of any material from tellybest.com without written permission is strictly prohibited.
Cached Saved on: Wednesday 19th of January 2022 12:33:34 PM