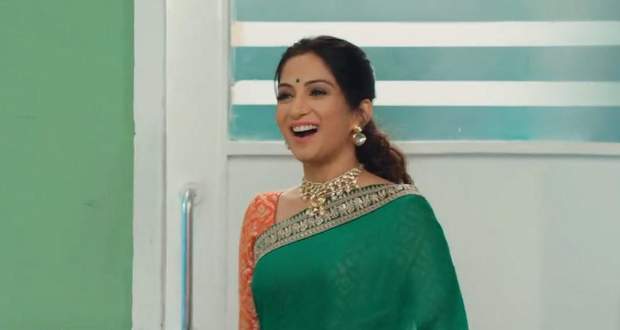 Malti reveals how she made Sharda, Saaransh, and Roohi leave early and also added a substance in Rudra’s water to make him sick so he could not be with Preesha in the operation theatre.

Meanwhile, Revthi tells Malti that she got what she wanted and now it is her partner’s turn.

The partner turns out to be Armaan who was called by Revthi when she saw him with Preesha.

Armaan joined his hands with Revthi, calling Preesha to his room as he lied about Anvi.

On the other hand, Rudra walks into Preesha’s wardroom, excited to meet his baby boy.

He hugs Preesha, saying thank you for giving a such a big happiness to him.

However, Preesha cries, telling Rudra that Revthi along with Malti took RuSha’s baby away from them.

Preesha explains to Rudra that Revthi stayed in their house to seek revenge for Dev and Rakesh.

She further tells him how Revthi continued to blackmail her with Gopal’s death and Saaransh’s arrest.

Preesha asks Rudra to say something as he stays quiet.

Suddenly, he screams and asks Preesha what should he say as he blames Preesha for hiding such a big secret from him.

Rudra repeatedly tells Preesha she should have trusted him more than Malti, screaming that this is not a way to make a family.

As Preesha begins to say something in her defense, Rudra tells her to stay quiet as he scolds Preesha for always leaving him alone while taking big decisions in their life.

Rudra is fed by Preesha doing the same mistake again as Preesha cries and asks him to see her condition before blaming her.

Meanwhile, Saaransh and Roohi distribute sweets to the entire hospital as their baby brother is here now.

However, Saaransh hears Rudra scream at Preesha about how could she choose Saaransh over their own blood.

Screaming, Preesha tells Rudra that she tried to tell him many times about Revthi’s truth but he wasn’t ready to believe Preesha.

Pushing the hospital bed forcefully, Rudra tells Preesha that she has lost everything and is a big loser.

She doesn’t have her baby nor her husband’s love or trust no more.

He says that maybe even God knew Preesha wasn’t deserving to be their baby’s mother as Preesha gets shocked.