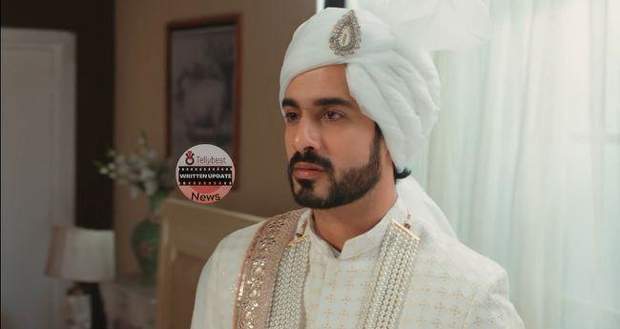 Today's Yeh Hai Chahatein 15th November 2022 episode starts with Rudra telling Roohi that she has Pihu as her mother who will prove to be a better mother than that Preesha.

Preesha looks at him heartbreakingly while Rudra looks at Preesha and tells Roohi that she has her father and new mother Pihu.

Later, Saaransh talks to Roohi in her room and tells her that he is sure something stopped Preesha from stopping the marriage.

Pihu realizes that Pihu has something to do with it and forms a plan.

Roohi goes to Rudra's room and drags him away from Pihu saying that she has something important to tell him.

Roohi tells Rudra that she is upset with him for marrying Pihu.

Meanwhile, Pihu thinks to go to sleep and lies on the bed.

Roohi tells Rudra that Armaan is also upset with the marriage and had went to his room with a white power.

Just then, they hear Pihu's shouts and they rush to the room to find out that she has rashes all over her body.

The family members arrive there and Roohi reminds Rudra about the white powder that she saw Armaan with.

Rudra goes to the bed and checks after which he finds white itching powder there.

Rudra angrily rushes to Armaan's room and starts beating him while Preesha comes there and stops him.

Preesha asks him what happened while Rudra tells her that Armaan had put itching powder in his bed to stop him and Pihu from spending their first night together.

Saaransh puts a packet of the itching powder on the bedside table as the flashback shows Roohi and Saaransh putting the power in Rudra's bed to separate him and Pihu.

Back in the present, Roohi points out the packet of itching powder on the bedside table and Rudra claims that it is evidence.

However, Digvijay and others hold him back telling him to not ruin the night any more than it is already.

Armaan tells Preesha that it was Roohi who did it but Preesha doesn't give him a satisfactory answer and tells him to go to sleep.

Armaan that he will take his revenge on Roohi and draws a mustache on her face when she is sleeping.

The next morning, Saaransh wakes up and starts laughing as he sees the mustache on Roohi's face.

Roohi goes to the bathroom and tries to remove the mustache but it doesn't work after which she forms another plan to get revenge on Armaan.

Later, Armaan wakes up and tries to get out of bed, and when he suddenly falls due to his shoelaces being tied.

© Copyright tellybest.com, 2022, 2023. All Rights Reserved. Unauthorized use and/or duplication of any material from tellybest.com without written permission is strictly prohibited.
Cached Saved on: Monday 21st of November 2022 02:47:04 AMCached Disp on: Tuesday 29th of November 2022 12:14:56 AM