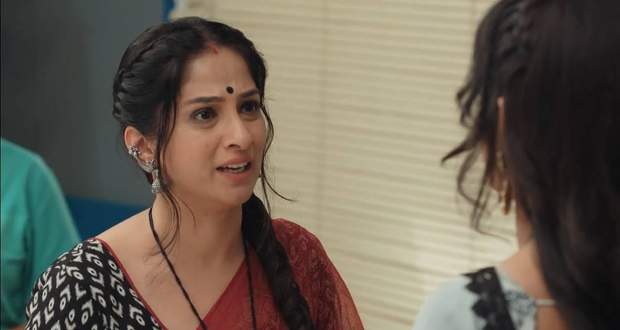 Today's Yeh Hai Chahatein 16th April 2022 episode starts with Alia and Saaransh practicing in the music room while Vicky sees them and gets angry.

Vicky calls Dev and informs him about Saaransh practicing with Alia making Dev furious at Saaransh.

Alia goes to the washroom while Saaransh gets a call from Dev who threatens to call the jail and send him to a juvenile home for hanging out with Alia.

Saaransh gets scared hearing Dev's threats and runs out of the music room.

Alia gets confused seeing Saaransh leave without telling her anything.

Preesha sees Saaransh in the hallways and takes him to her office where Saaransh informs Preesha about Dev's threat.

Preesha again calls the number but realizes that it is a male nurse's phone after which she thinks of a plan.

Just then, Alia calls Saaransh and Preesha picks it up to ask for Revati's number from Alia who informs Preesha that Revati is at the hospital.

Preesha goes to the hospital and tries to talk to Revati who says that she knows why Saaransh hit Dev.

Flashback shows, Dev lying to Revati that Saaransh was stalking Alia and beat up Dev when he tried to warn Saaransh to stay away.

Elsewhere, at the Khurana mansion, Rudraksh returns home and Sharda informs him about Dev's threats.

Rudraksh comes to the hospital and starts fighting with Dev who starts shouting to get Revati's attention.

Revati and Preesha enter the hospital room as Revati drags Rudraksh away.

Rudraksh demands to check Dev's phone when Revati tells him that she had Dev's phone since the previous night shocking Rudraksh.

Revati kicks out Preesha and Rudraksh after which Rudraksh again fights with Preesha for not informing him.

They reach home and Rudraksh starts arguing loudly with Preesha when Ruhi comes there and makes them hug to stop the argument.

Preesha tells Ruhi to sleep with them for the night hoping that Rudraksh will sleep on the bed and not the couch for Ruhi.