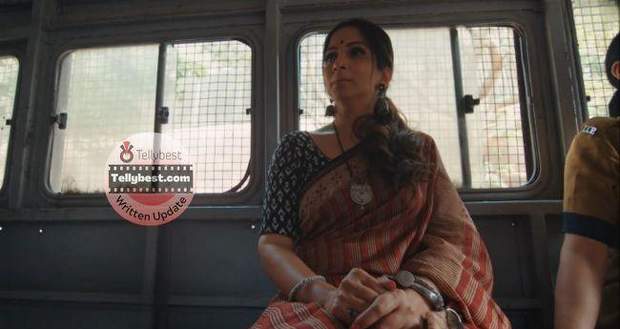 Surprised Preesha asks what is Rudra doing and he states to obvious that he is getting close to his wife.

He further says that in the past few days they have suffered so much together and didn’t get a chance to be with each other for a long time.

He further says that she can’t push him today as he wants to love his beautiful wife.

Embarrassed Preesha tells him that this isn’t their old house and they have no privacy here so he should stop.

Rudra tells his wifey that if anyone hears them the only thought that will come to their mind will be that husband and wife are spending some quality time together.

Then Preesha’s bangles make sounds so Rudra takes her hand as he kisses it Preesha lowers her eyes then he ties them with a thread with a light hand so that they don’t hurt her.

He gets a glimmer of excitement in his eyes and he says that now the romance begins.

Due to that excitement, he pushes Preesha to the kitchen slab which results in glasses dropping on the floor and Preesha hits him on his shoulder.

On the other side of the curtain, everyone wakes up, and Sharda and Saaransh smirk and manipulates Ruhi to sleep outside.

While going out Sharda tells Rudra and Preesha that they will be sleeping outside and she smirks.

Hearing this Rudra sighs in relief and proudly tells Preesha that his mother is awesome and even she knows the value of quality time.

Preesha hits him gently again and tells him that he is shameless then lowers her eyes and smiles.

He kisses her forehead and a glimmer appears on Preesha’s face further Rudra kisses her cheeks and picks her up.

Then he takes her out and spins her in the air and tries to put her down while he does that Preesha’s mangalsutra breaks and its beads fell apart.

Preesha tells him that she has a feeling that they will get separated again.

Rudra tells her that their being is the proof of their love and that even when they die their love will live on and fixes her mangalsutra and puts it around her neck.

The next morning, Rudra brings Preesha, Sharda, Ruhi, and Saaransh to their house in blindfolds and surprises them with the good news that he has got his house back.

Pihu embraces Preesha and does a proper ghraprevesh.

Preesha then remembers her first ghraprevesh and she hugs Rudra.

Afterward, Digvijay gives Rudra all the property papers but Preesha thinks that something bad is going to happen.

Later, in the evening Rudra calls the police and tells them to investigate more about Revati as she is the only one who knows about his child.

Preesha hears him and asks if the Police found something and she understands his silence.

Seeing Preesha like that he assures her that he will find their baby.

Ruhi and Saaransh come to Rudra’s bedroom so that they can sleep with them but seeing Rudra hugging Preesha, Sarransh says they should let them be.

They all sleep and Rudra takes Preesha out on the terrace and surprises her with a romantic place setting.

© Copyright tellybest.com, 2022, 2023. All Rights Reserved. Unauthorized use and/or duplication of any material from tellybest.com without written permission is strictly prohibited.
Cached Saved on: Wednesday 25th of January 2023 11:46:40 AMCached Disp on: Wednesday 1st of February 2023 09:11:26 PM