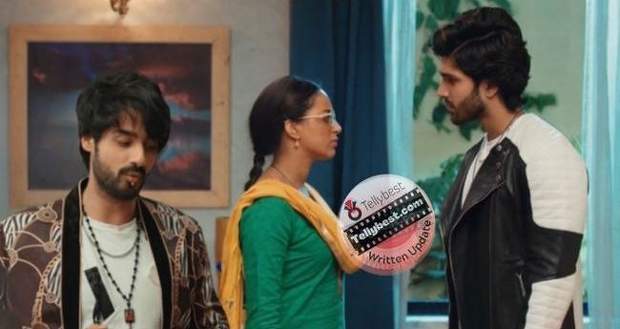 Today's Yeh Hai Chahatein 16th January 2023 episode starts with Samrat realising that Nayan is not in the washroom and thinks that she must have reached the waiting room.

However, when he goes to the waiting room, he realises that Nayan has already escaped.

Revati says that the girl doesn't have that many guts while Sam tells her that she doesn't know Nayan.

Revati wants to know what they should do next while Sam reveals to her that he knew something like this would happen so he had already put a tracker in Nayantara's phone.

Flashback shows, Nayan falling asleep while Samrat takes her phone and puts a tracker in it.

Back in the present, Samrat pulls out his phone and sees the map which shows the location where Nayan is going.

Revati tells him that the road leads to the temple and Samrat rushes out of the court with her as he says that he is sure Nayan and Mohit are planning to get married at the temple.

They reach the temple and get furious as they see the Iyer family blessing the bride and Mohit.

The priest says that the marriage is completed while Samrat shouts that this marriage cannot happen.

He starts arguing with Mohit while telling him that the marriage is illegal since Nayan is already married to him.

Nayan comes forward just then and announces that it is not illegal since the person Samrat married is her and she is not the one married to Mohit.

Sam and Revati get confused while Nayan reveals that the truth is that Mohit never really loved her, it was always Ishani from the start.

Sam stands shocked and furious while Nayan tells him that God knows why he thought Mohit loved her and took Rahul's place at the marriage thinking that it is Mohit.

Samrat questions why they hid it from him while Nayan retorts that it was because she wanted to save Ishaani from him and wanted to get Ishaani and Mohit married.

Flashback shows Nayan telling Mohit to convince Samrat that he wants to marry Aliya while he will marry Ishaani at the temple.

Back in the present, Nayan reveals that she also escaped from there with the excuse of going to the washroom.

In reality, she went to the parlour and lied to Aliya that Samrat is the one who sent her.

Further, while in the car, Nayan acts helpless in front of Aliya and boosts her ego while convincing her to drink the spiked juice.

Nayan leaves the unconscious Aliyah in the car and goes to the temple to get Ishaani and Mohit married.

Back in the present, Samrat gets violent with Nayantara when she tells him that she repaid the favour of him getting married to her by trickery.

Revati demands to know where Aliyaa is and rushes to the car where Aliya is still unconscious.

Revati wakes her up and complains to Aliya that Mohit is already married to someone named Ishaani.

Aliya and Revati rush to the temple where she sees Mohit and Ishaani in wedding attire and gets shocked.

Aliya cries that her life is ruined while Samrat blames Nayan for it and tells her to get out of the house.

Nayan also tells him that she was caged in his home and is leaving the house by herself with her whole family.

Further, Malti worries as she asks Nayan where they will go while Mohit assures them to not worry as he has booked rooms for them at the same hotel where he and Ishaani are staying.

© Copyright tellybest.com, 2022, 2023. All Rights Reserved. Unauthorized use and/or duplication of any material from tellybest.com without written permission is strictly prohibited.
Cached Saved on: Wednesday 25th of January 2023 12:08:24 PMCached Disp on: Wednesday 1st of February 2023 09:58:48 PM