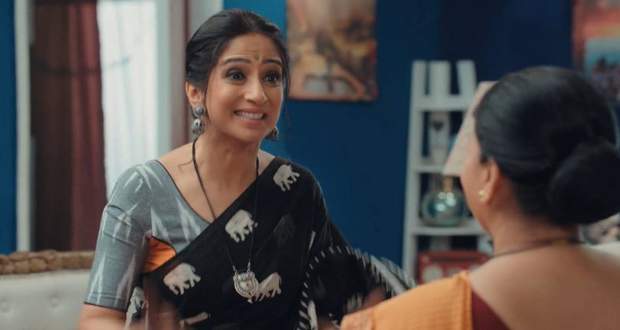 Preesha asks Rudra what kind of a life partner is he if he cannot support Preesha right now.

Preesha tells Rudra that she repeatedly tried to tell him about Revthi but he refused to believe her.

However, Rudra fumes in anger and asks Preesha what evidence she have against Revthi as he believes Preesha made a deal about her baby with Armaan.

Preesha says that Rudra lost nothing, he just took care of a pregnant Preesha for nine months but Preesha bore the baby in her womb.

However, Preesha asks Rudra to leave immediately as she is hurt deeply this time by his suspicion.

Rudra leaves and tells Sharda that there won’t be any baby coming as Sharda decorates the whole house.

Rudra narrates the whole story of how Revthi took away RuSha’s baby as Sharda cries.

Rudra asks Sharda if he did anything wrong in leaving Preesha alone at the hospital and Sharda says yes.

As a mother, Sharda understands Preesha’s condition and tells Rudra that instead of supporting her, he just added to her tears and pain.

Rudra regrets his hateful words and tells Sharda he will throw himself at Preesha’s feet to apologize as Gopal arrives at Khurana House.

Gopal narrates the treatment he received from Revthi.

She changes into normal clothes but Armaan enters her wardroom secretly and injects a dose in her neck that renders Preesha unconscious.

Holding Preesha, Armaan swears to never let Preesha be with Rudra now as he leaves a fake letter written by him.

As Rudra arrives at the hospital, he sees the letter left by Armaan and thinks that Preesha has left him.

Inside the letter, Armaan mentions that Preesha has nothing left to be with Rudra anymore and asks him to not search for her.

The next scene shows Preesha as Armaan’s wife tying his tie.

Parallelly, Roohi is shown tying Rudra’s tie for his concert as he is a single father now. Nani Ma Roohi asks Rudra if he is okay and he smiles at her.