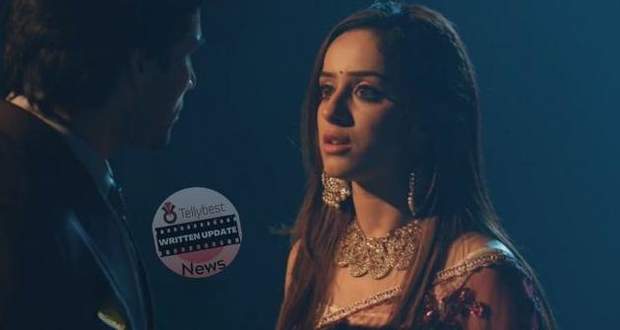 Preesha tells him that they have trapped him in his plan while Rudraksh says that he can never separate the two as they love each other.

The couple tells Armaan that they have enough evidence against him and the police take him away.

However, Armaan thinks that he still has a plan and will soon bring the couple down with his shocking revelation.

Further, Rudra tells Preesha that he was just alive without her and that now is living his life with her.

Raj and Vidyut congratulate the couple for getting back together while Preesha tells them to call her Bhabhi.

Later, Rudra tells Preesha that the Khurana house is waiting for her and takes her as Sharda and the kids wait to do her Grahpravesh.

However, GPS stops them and reveals his concern about Preesha still being married to Armaan legally.

Rudra reveals that he has already talked to the lawyer and gotten the divorce papers which he will get signed by Armaan the next day.

Preesha enters the house and greets everyone happily while she apologizes to Pihu.

However, Pihu says that she is upset she won't be able to meet with Preesha that much anymore and asks if she can still call her SIL.

Preesha says that she should not call her SIL but her sis as they are like sisters.

Preesha further thanks Vidyut and tells him that she also thought he was a bad person but now she realized that he has changed.

Pihu looks at Vidyut with uncertain emotions swirling in her eyes as she goes to being Preesha's luggage.

Raj goes to help her and asks Pihu if she can think about them now that Rudra and Preesha are also together.

However, Pihu politely rejects him by saying that she only thinks of him as a friend.

Raj leaves while Vidyut corners her and demands to know why she rejected Raj.

Before Pihu can say anything, Vidyut corners her by the car and tells her to accept that she has him in her heart.

Pihu gets shocked and pushes him away and leaves stating that she does not like him.

The next morning, Preesha and Rudraksh feed each other sargi while they both smile and enjoy their moment together.

Further, Digvijay tries to get Armaan's bail but the police refuse to give him bail.

Rudra and Preesha come there just then with the divorce papers while Digvijay tells them that Armaan will sign the papers only when they take back all the cases.