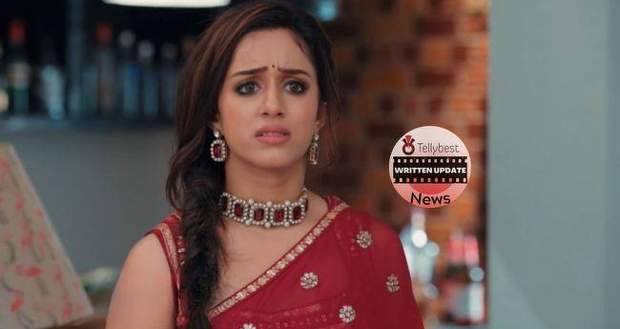 Rudraksh is taking a bath and Armaan and Chachaji get shocked to see him without his wig and disguise.

Back in the present, Armaan thinks that he knew exposing Rudraksh will lead to Preesha feeling betrayed by him.

Pihu sides with Rudraksh but Dijvijay and Armaan scold her while telling her that he will launch her album if that's the case.

However, Pihu says that she knows something and tells Rudraksh to say the truth or else he will be pronounced guilty today.

Preesha laughs saying that she knows the truth when Rudraksh stops her telling her that she doesn't know anything.

Rudraksh angrily reveals to Preesha that she is being given memory-loss pills instead of her medicines and says that they were a happy family living together.

Using his strategy, Armaan argues with Rudraksh while Preesha sides with Armaan and tells Rudraksh that he tortured her and now Armaan is helping her mental health by giving her daily medication.

Rudraksh begs Preesha to believe him while Armaan confidently tells Rudraksh if he has any evidence to back up his accusations.

Rudraksh takes the whole family into Armaan's room and tells him that Armaan is hiding the safe behind the picture which contains the medicines being given to Preesha.

However, upon opening the safe, there is only money inside and Armaan starts mocking Rudraksh.

Flashback shows, Armaan planning his revenge on Rudra and removing the medicine from the safe beforehand.

Back in the present, Rudraksh tells Preesha that he has old medicines and goes to the garden and loons into the old pots.

The medicines are not there also and Preesha's belief in Rudraksh gets smaller and almost non-existence.

Armaan has also removed the medicines from there before executing his plan.

Rudraksh begs Preesha to believe but Preesha tells him to leave.

© Copyright tellybest.com, 2020, 2021. All Rights Reserved. Unauthorized use and/or duplication of any material from tellybest.com without written permission is strictly prohibited.
Cached Saved on: Sunday 2nd of October 2022 12:08:40 AM