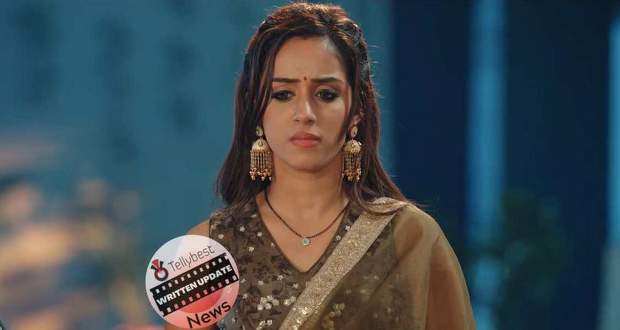 Just as they reach the parking lot, Rudraksh (Prem Mali) comes there and tells Roohi that he was looking for her when Roohi insists that he comes with her.

Preesha also tells Premji to come with the kids and they all leave while Chachaji watches them leave from the window.

Further, at the ice cream shop, Rudraksh does drama and puts ice cream on Preesha's nose dubbing it an accident.

As anticipated by Rudraksh and the kids, Preesha gets flashbacks and stands from there saying that this same incident has happened before.

Rudraksh helps Preesha wash her face when his fake mustache is removed.

Roohi helps Rudraksh put the mustache back in place without Preesha noticing.

The next morning, Armaan and Chachaji discuss Preesha's last night trip and conclude that Premji the gardener is bribed by Rudraksh which is why he is with the Khurana kids a lot.

Meanwhile, Rudraksh and the kids sit in his room and discuss which memory of Preesha to recreate and Roohi suggests one.

The flashback shows, Roohi complaining to Preesha and telling her to sing so that she can complete her work in the washroom.

However, Preesha sings horribly while Rudraksh comes there and teases her singing skills.

Preesha further challenges Rudraksh to a Susu Challenge and they both dance while Rudraksh sings and Roohi completed her business in the washroom.

Back in the present, Rudraksh agrees to this plan and they all go to Preesha's room.

Elsewhere in college, Raj and Pihu are practicing their dance routine while he accidentally steps on her foot.

Just turn, Vidyut comes there and mocks Raj's dancing skills after which he offers to help to state that he is doing it for Rudraksh's sake and reputation.

Pihu states that she's okay with it if Raj agrees.

Further, Vidyut and Pihu dance romantically and get lost in the eyes of each other while Raj feels jealous and leaves.

Back at the Thakur house, Rudraksh comes to Preesha's room and brings her to Roohi who complains that she wants to go to the loo but cannot until someone sings for her.

Premji states that he cannot sing and convinces Preesha to sing.

Roohi goes inside the washroom while Preesha starts singing horribly which hurts both Rudraksh and Roohi's ears.