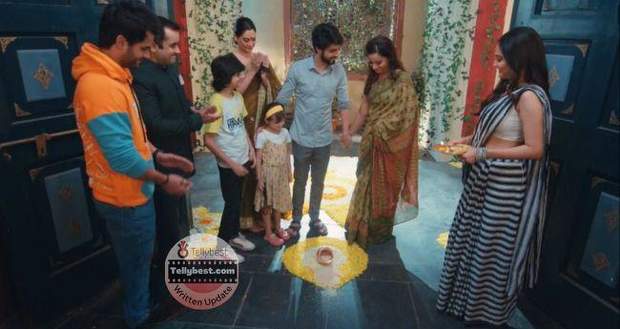 Today's Yeh Hai Chahatein 17th December 2022 episode starts with Rudra telling Preesha that this night is special for them too as a family and as a couple.

He stands up and takes her hand in his for a dance and dances with her while telling her that every moment spent with her is a moment lived.

He picks her up and takes her to the canopy bed while lying on her side himself.

She inches closer to his side while he tells her that he wishes they stay together like this, with her in his arms their whole life.

Both wish for the same thing and fall asleep in each other's arms.

On the other hand, a constable informs Revati that Rudra has gotten everything back and that he has his whole family has shifted back to the Khurana house.

Revati tells the constable to do as she says or else she will take back the money that she had given to him for his son's operation.

Later, the constable returns home and informs his wife, Seema that he has paid all the hospital bills and that she can go to him medically checked again for his surgery.

She gets happy when he informs her that he cannot come to the medical checkup with her since he has some important work.

Further, Subbu, the constable tells himself that he knows Seema would not have let him take the money if she knew the work that Revati had told her to do.

Back at the police station, the officer informs Preesha and Rudra and they found a chemist's number in Revati's phone.

He also reveals that the drugs for a kid were delivered.

The couple says that they should go and search that place for their baby.

The police officer agrees and they all reach the place where they try to look for the baby after hearing their voice.

However, a lady comes there and takes away the baby saying that it is hers.

The couple gets disappointed when the lady informs them that Revati helped her with the medicines.

Rudra and Preesha get back in their car and return while Sharda calls Preesha and asks about the baby.

Preesha half-heartedly informs that the baby was not theirs when someone driving a truck immediately hits their cat from the back.

However, Rudra realizes the situation and unhooks both his and Preesha's seatbelt while opening the car doors to get out of the car.

The car hits a wall and bursts into flames while the passerby people help Preesha and Rudra get up and go to the hospital.

Meanwhile, the truck driver calls Revati and apologizes to her while informing her that Rudra and Preesha didn't die even after the accident.

Revati says that it is okay and tells him to keep his mouth shut and get out of the radar for some time.

As the call disconnect, Revati tells Subbu that now he will have to go through with the final plan and tells him to do his task properly.

© Copyright tellybest.com, 2022, 2023. All Rights Reserved. Unauthorized use and/or duplication of any material from tellybest.com without written permission is strictly prohibited.
Cached Saved on: Wednesday 25th of January 2023 09:42:08 PMCached Disp on: Sunday 5th of February 2023 03:56:04 AM