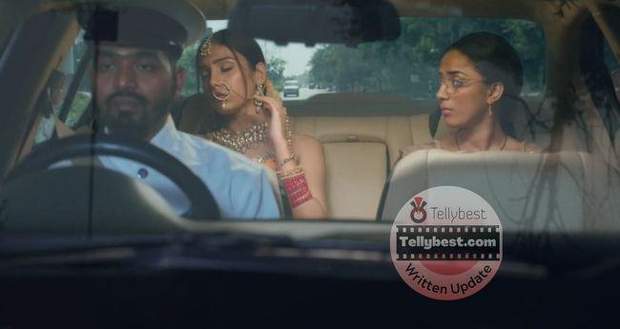 Today's Yeh Hai Chahatein 17th January 2023 episode starts with the Iyer family walking downstairs with their luggage while the Choudhary family looks on.

Nayantara comes in front of Samrat and tells him to look as much as he wants since this will be their last time meeting each other.

Sam tells her to get lost while Nayan states she doesn't want to live in this jail either.

Revati stops them just then and taunts the Iyer family while suggesting that they must have stolen something from the big mansion.

Nayan tells her to think before speaking and states that now we understand why Samrat is the way she is.

She calls both of them shameless while Aliya tries to interfere.

However, Nayan silences her while reminding Revati that the main culprit in the whole situation is not her but Revati's son, Samrat Choudhary who tricked her into marrying him.

Revati ignores Nayan and tells her guards to check their bags while Malti also says that the person with the real dirty mind will be exposed when the bags are checked.

As the bags are getting checked, Nayan walks up to Samrat and tells him that she feels even more upset that he is doubting her family's dignity and states she feels upset she ever thought he was a nice guy.

She talks about the times when he helped her and states that he was just joking.

Sam also retorts that he thought she was a good person which is why he shared those things with her but he knows now that she is an evil and cunning person.

However, Nayan silences him as she tells him that Mohit never loved Alia and that Alia is heartbroken now but she will be grateful in the future for not being married to someone who didn't love her.

Nayan states that she has saved Aliya's life along with Ishaani and Mohit's but he won't thank her for that.

Before Sam can say anything, the servants state that there is nothing in the bags.

Nayantara walks up to Revati and asks her if anything else is left while Revati and Aaliya walk upstairs.

The Iyer family leaves while Sam sits in his room and thinks about his moments with her.

His eyes land on Nayan's earrings and thinks about the night when she was drunk when Revati comes there and asks him about the earring.

Sam states that they are Nayan's and makes an excuse that he was just going to throw them away.

Revati asks him what he and Nayantara were talking about in the hall and Samrat reveals to her how Nayan helped him first and how he developed a soft corner for her.

Revati influences his mind as she tells him that he should know now what type of girl she is.

Samrat states that he knows which is why he is hurt more.

Meanwhile, at the hotel, the Iyer family is checking in while Mohit comes there and asks them about Ishaani.

Nayantara asks him if he checked thoroughly while Mohit brings her to the room and shows the room scattered with things.

Both Nayantara and Mohit think that it is Samrat's doing and rush to confront him.

However, Samrat argues with Nayantara as he states he does not know where Ishaani is nor did he kidnap her.

Mohit begs him to let Ishaani go while Nayan calls him a monster.

Sam calls Nayan crazy and states that he will help them in finding Ishaani just to prove that he is innocent.

However, Aliya is watching this while Revati comes there and stops Samrat from going as she states that he has no reason to prove to Nayan.

Samrat refuses as he says that he has to prove his word and leaves.

Further, Samrat takes Ishaani's phone number from Nayan and puts it into an app to find her location while Nayan gets surprised.

Samrat gets the location of APS Mills and informs Nayan and Ishaani about it.

© Copyright tellybest.com, 2022, 2023. All Rights Reserved. Unauthorized use and/or duplication of any material from tellybest.com without written permission is strictly prohibited.
Cached Saved on: Wednesday 25th of January 2023 01:16:18 PMCached Disp on: Monday 6th of February 2023 04:26:45 AM