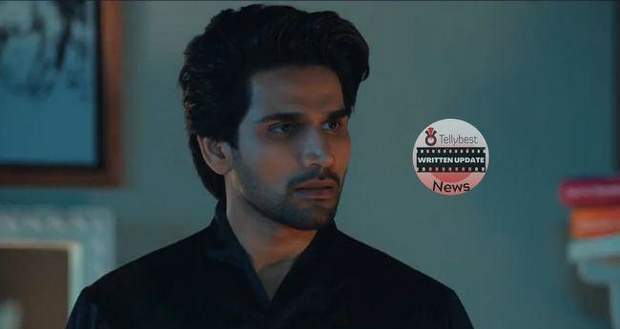 Today's Yeh Hai Chahatein 17th September 2022 episode starts with Preesha asking Rudraksh to not come near her again and telling him that his lies have been exposed.

However, Roohi speaks up just then and tells Preesha that Rudraksh is not lying as she helped her father in hiding the medicines and replacing them with the correct ones.

Armaan uses this to his advantage and manipulates Preesha by saying that Rudrakash and his whole family along with his manager were trying to trick Preesha.

Digvijay tells Armaan to call the police but Preesha stops him and says that she doesn't want the kids to see their father getting arrested.

Afterward, Preesha tells Rudraksh to not come near her again.

Preesha even stops Roohi from coming near her by telling her that she has hurt her and advises her to return with her father.

Later, Rudraksh, Saaransh, and Roohi return to the Khurana mansion empty-handed and inform Sharda that Armaan exposed them and Preesha hates them even more.

The kids cry saying that they will never get Preesha while Rudraksh feels as if he has failed.

Back at the Thakur mansion, Pihu gives the love letters to Preesha and tells her to read them to know how much she loves Rudraksh.

However, Preesha tells her to take away the letters but Pihu makes her look her in the eyes as she asks Preesha if she didn't feel any attraction and love when Rudraksh came close to her.

Preesha tells her to remember how Rudraksh tried to kill her and states that she remembers everything.

Pihu says that she doesn't know why Preesha has those memories and leaves from there requesting Preesha to read the letters once.

Both Preesha and Rudraksh spend the night without sleep as they keep thinking of their memories with each other.

Preesha reads the love letters and feels something in her heart while Rudraksh finds solace in alcohol.

However, he sees Preesha's photo and throws the bottle of alcohol away as he strengthens his resolve to stay strong and fight for Preesha.

On the other hand, Preesha wakes up to find Armaan burning the letters in fire and puts her hand into the fire to save the papers.

Armaan asks her why she did that and she states that she feels that the letters are correct and that Rudraksh really loved her.

Armaan once again looks at Preesha and shows her that the ink can be smudged indicating that the letters are recently written.

Preesha falls into Armaan's trap once again and thinks that Rudraksh is manipulating her.

However, a flashback shows Armaan writing over the letter to smudge them in front of Preesha later.

© Copyright tellybest.com, 2020, 2021. All Rights Reserved. Unauthorized use and/or duplication of any material from tellybest.com without written permission is strictly prohibited.
Cached Saved on: Sunday 2nd of October 2022 07:30:23 AMCached Disp on: Wednesday 5th of October 2022 04:57:14 PM