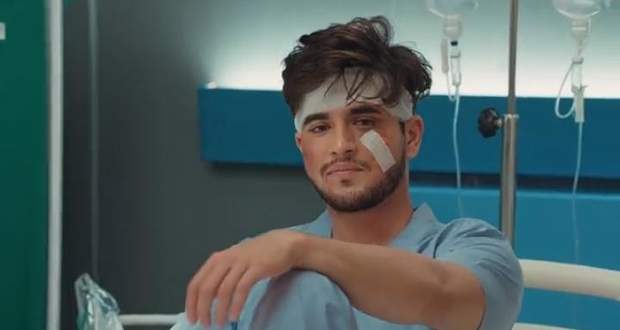 Today's Yeh Hai Chahatein 18th April 2022 episode starts with Preesha telling Ruhi that she can sleep in their room for the night and tells her to change into her pajamas.

Rudraksh sleep beside Ruhi until she falls asleep after which Rudraksh goes to sleep on the couch making Preesha feel demotivated.

The next morning, Ruhi gets excited about the annual function while Preesha calms Saaransh and advises him to only focus on his performance.

Elsewhere, Tarun and Vicky go to meet Dev at the hospital while Tarun asks Dev questions and Dev boasts about his plan on how he used his mother's trust to destroy the Khurana family's life.

Later, Tarun meets up with Preesha and gives her the video he made of Dev's confession while telling Preesha that Revati should learn Dev's true nature.

Preesha goes to the school and shows the video to Alia and convinces her to help them while Vicky overhears them.

Preesha goes to Rudraksh and shows him the video after which Rudraksh says that they should give the video to the police.

However, Preesha refuses saying that she wants Revati to know the truth first as she is a heart patient.

Rudraksh again misunderstands Preesha and leaves warning her that their family should not be jeopardized.

At the hospital, Vicky informs Dev about the video and Dev decides to harm Ruhi as revenge.

Later, Preesha and Rudraksh are unable to get ready and refuse to ask each other for help when Ruhi comes there and orders them to help each other.

Rudraksh helps Preesha tie the strings of her blouse as they look into each other's eyes in the mirror when Rudraksh tightens the strings initially to hurt her for betraying his trust.

Afterward, Preesha helps Rudraksh with the tie but she also ties the tie too tight to take revenge and calls him out for accusing her of everything wrong.

Meanwhile, at the hospital, Dev requests the nurse for a sleeping pill and pretends to fall asleep in front of the nurse.

However, as soon as the nurse leaves, Dev throws away the pill and keeps pillows in his place as he sneaks out through the window.