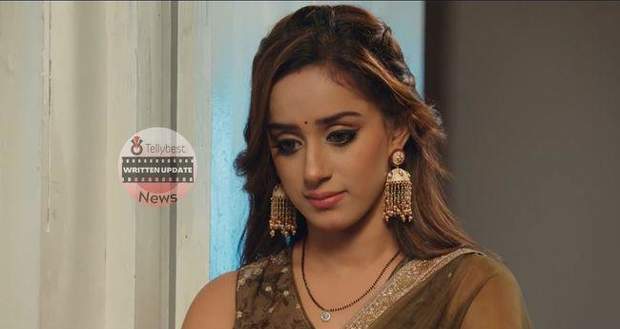 Today's Yeh Hai Chahatein 18th August 2022 episode starts with Roohi asking Preesha to sing so she can pee in the bathroom.

However, Preesha says she is not a good singer.

Just then, Saaransh comes and sings the song “A Aaja Aaja” making Roohi dance inside the bathroom along with Prem Maali who grooves to the lyrics of this peppy song.

Preesha laughs while Roohi flushes the toilet to make it look like she actually peed.

A second later, Preesha gets a flashback of herself and Rudra challenging each other to sing to make Roohi pee.

Pihu comes up to him and asks Raj whether he is jealous or not.

Raj doesn't look at Pihu and tells her he can be a playback singer for Vidyut while he can dance with Pihu.

Pihu chuckles and tells Raj she only wants to dance with him, and not Vidyut.

On the other hand, Rudra notices Preesha’s facial expression change and she screams.

Rudra gets shocked when Preesha faints and carries her to the bedroom.

However, Arman gets angry to see Prem Maali touch his wife without his consent.

Being a fierce little girl, Roohi tells Arman he cannot talk to her father like this.

It was Preesha who fainted and needed help.

At night, Kanchan brings food for Prem, Roohi, and Saaransh and also informs them about Preesha’s health.

This time, Rudra decides to evoke a memory of Janmashtami for Preesha by gifting her a toy peacock and a small idol of Little Krishna.

Saaransh warns Rudra not to do anything that makes Preesha faint again.

Prem then takes an auto to meet Vidyut, making a suspicious Arman follow him.

Arman takes a photo of Prem and Vidyut together and shows it later to Kanchan, Digvijay, and Preesha.

Arman thinks that Rudra has sent Prem Maali to keep tabs on Preesha.

He talks boorishly to Roohi and asks her to stop pretending that Prem is her father.

However, Saaransh tells Arman he cannot talk to his sister like that. Preesha also scolds Arman by saying ‘Enough’ of his angry tone and consoles a crying Roohi who calls both Arman and Digvijay a "bad uncle".

Prem enters his room minutes later and gets cornered by Arman.

Arman questions Prem whether Rudra has sent him or not while Prem says he doesn’t know who Rudra Khurana is.

Arman then shows Prem the photo he clicked of him and Vidyut together, making Rudra sweat a little inside his fake beard.