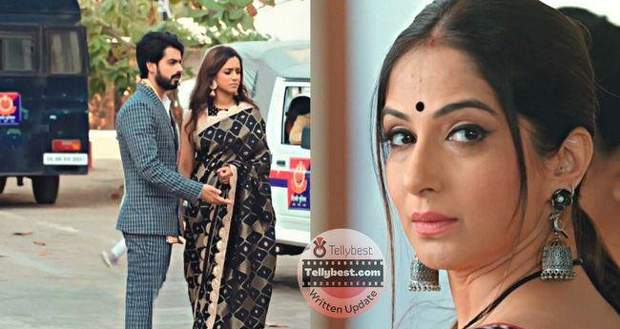 Today's Yeh Hai Chahatein 18th December 2022 episode starts with Sharda coming to meet Preesha & Rudra at the hospital while Ruhi and Saaransh ask them if they are ok.

Ruhi hugs Rudra, meanwhile, Saaransh hugs Preesha and gets a kiss on his forehead.

Sharda requests Saaransh to take Ruhi outside and then turns to RuSha and starts scolding them.

Sharda states that they do not care about anyone and just went ahead to find their third baby without caring for the present ones.

In a panicked tone, Sharda reveals that if anything happens to Rudra or Preesha, where will Ruhi and Saaransh go and sudders even at the thought of something happening to them.

Later, while Rudra showers, he asks Preesha for a towel but the kids snatch the towel away from Preesha's hand.

Ruhi crosses her tiny arms and scolds Rudra for not doing his own work while he gets flabbergasted and say he just asked for a towel from Preesha.

Preesha enjoys the fun banter between the kids and Rudra as he calls them "Mummy ke chamche".

Rudra then threatens all three of them to either give his towel, or he will come out naked.

However, when Rudra does come out, the kids close their eyes & run away; squealing.

Preesha also closes her eyes but Rudra has his underwear on with a shirt tied around his waist.

He hugs her and says now that the kids are gone, he will enjoy his wifey but Preesha reminds him that they have to go to the court for Revati's hearing.

Meanwhile, the lady police officer cuffs Revthi's hand to transport her to the court.

While walking, Revthi whispers to the constable she has bribed to do the work, otherwise she will take all the money she gave him for his son's treatment.

RuSha also arrives outside the court and meets Vidyut, Pihu, and Digvijay.

Vidyut informs Rudra that he is joining his father's business and will marry Pihu soon.

They all bid goodbye to each other with Rudra calling Sharda and asking her to bring the kids after the hearing so they can go out for lunch.

Revthi is proven guilty in the court and is taken inside the jail and Rudra & Preesha meet her outside to enquire about their kid but in vain.

Sharda then arrives a second later with Ruhi and Saaransh.

Rudra picks up Ruhi in his arms and swings her in the air as the Khurana's experience the happiness of being together after a long haul.

Revthi watches them from a distance and signals to the constable to go near them.

The constable feels bad but stands near RuSha and opens his police uniform, revealing the bomb planted on his chest.

He presses the red button that burns the whole area, as Rudra and Preesha lay dead on the ground, hand in hand.

Saaransh and Ruhi along with Sharda die too and the fire burning atop them seems as if their funeral is just this.

Revthi smirks as she is sitting inside the police van, saying that when their baby boy grows up, he won't sing songs of love.

Rather, she is going to fill so much of hatred for Rudra and Preesha in him that he grows up to be a monster, not a human being.

In the background, Rudra's voice is heard as he tells Preesha in a soul voice that even if they die, their love won't die because they are bound to return together.

A time lapse occurs and twenty years have passed by Rudra & Preesha's death.

In a South Indian Household, Malti is planning her daughter Nayantara's wedding and panics as her elder daughter comes and says Nayan will be ready in a bit.

© Copyright tellybest.com, 2022, 2023. All Rights Reserved. Unauthorized use and/or duplication of any material from tellybest.com without written permission is strictly prohibited.
Cached Saved on: Wednesday 25th of January 2023 06:43:31 PMCached Disp on: Sunday 5th of February 2023 04:35:48 AM