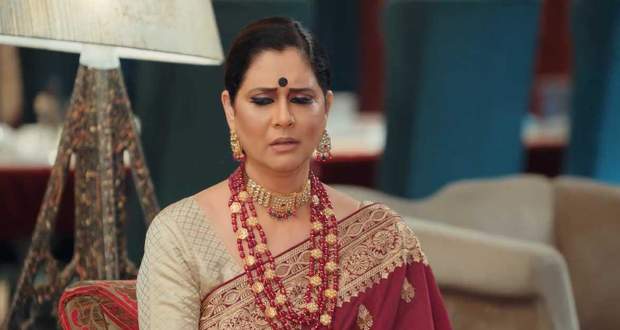 Today's Yeh Hai Chahatein 18th July 2022 episode starts with Shadra asking Rudra and Roohi why they didn’t tell her about anything.

At that time, Vidyut enters and says Pihu took back the police complaint and she was just being dramatic for no reason.

Hearing this, Rudra slaps Vidyut saying that he needs to learn how to respect women and that what he did to Pihu was unacceptable.

When Vidyut keeps putting the blame on Pihu for everything, Rudra gets even angrier and says Vidyut will go to Pihu’s home and apologise to her.

When everyone else leaves the room, Roohi smiles at Rudra and says she knows that Rudra is going to Pihu’s house to find an excuse to meet Preesha.

Roohi also insists on coming along with him to find out how Preesha lost her memory and forgot everything.

Meanwhile, Armaan asks his uncle why he booked a ticket to London instead of Mumbai for him and Preesha, so his uncle says that if they go to Mumbai, Rudra might follow them.

The doorbell rings and Pihu opens the door and is shocked to see Vidyut's family there.

Armaan asks Rudra what’s he doing here when he put him in jail.

Rudra says that he’s only here to make Vidyut apologise to Pihu.

He pushes Vidyut onto Pihu’s feet and Vidyut says sorry to Pihu.

Pihu doesn’t forgive him and asks Vidyut to stay away from her.

While Preesha is sleeping in her room, Roohi tries to sneak away to see Preesha and runs towards her in her room.

Preesha wakes up and asks Roohi what she’s doing here and Roohi says she just wanted to come to meet her.

Roohi asks her not to leave and tells Preesha she’s like her mother.

Preesha gets emotional hearing this and says she feels very connected to Roohi.

Roohi tells her that she brought a gift for her and hands over an embroidered napkin to her that was made by Preesha.

Preesha says that she doesn’t remember giving this to Roohi and asks her if they’ve met before.

At that time, Armaan’s uncle enters Preesha’s room and asks Roohi to leave the room and let Preesha rest.

Roohi resists but he drags her away while Preesha watches.

Preesha comes outside to stop him and asks him why he’s behaving like this with Roohi.

Preesha asks Roohi how she came here today and Roohi tells her she came with her father.

Armaan’s uncle texts him about Preesha coming downstairs along with Roohi to meet Rudra and Armaan asks all of them to leave.

Rudra says he won’t leave without his daughter and Armaan gets concerned.

Armaan says to Rudra that he knows he’s here to meet Preesha and threatens to throw him out.