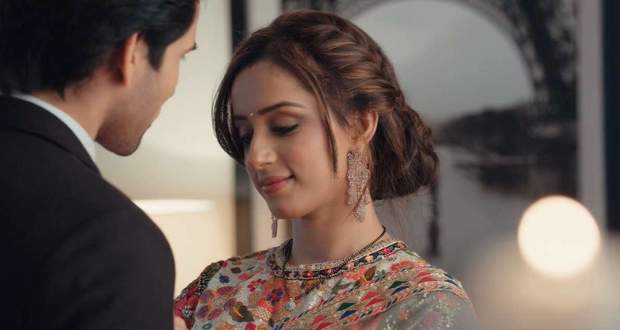 Today's Yeh Hai Chahatein 18th June 2022 episode starts with Roohi taking care of a drunk and unconscious Rudraksh and putting him to bed.

Further, she lays on his stomach and talks to Preesha's picture telling her to come back and be with them again.

Back at the Thakur house, Armaan sits to drink with his uncle while they talk about Preesha's increasing aggression.

Flashback shows, Armaan bribing the doctor to give Preesha injections that give her memory loss.

However, the doctor says that her memory can't be fully erased and they need to alter it.

Further, Armaan and the doctor hypnotize Preesha and make her believe that Rudraksh forcefully married her and abused her while she was in love with Armaan.

They make Preesha believe that Rudraksh had tried to kill her but Armaan saved her and took her away.

Another flashback shows, Preesha getting triggered by the word Wifey and smashing a glass bottle on Armaan's head.

Back in the present, Armaan's uncle questions what he has gained by all this as Preesha still hasn't accepted him as her husband fully.

However, Armaan says that it doesn't matter as Preesha is with him now.

Back at the Khurana house, Roohi tells Saaransh that Rudraksh has returned home knowing that he secretly cares for him, and goes to bed.

Both the children look at Preesha's picture and wish for her to come back while they sleep clothing the picture.

The next morning, Pihu happily informs the family that she has gotten the admission for Mass Media course at K.D. Stephan Institute in Delhi.

However, Armaan and her uncle refuse to let her go alone while Preesha offers to go with Pihu.

Afterward, Uncle agrees to let Pihu go to Delhi with the condition that Kanchan goes with her.

Everyone leaves the table after which a lady servant's hands start trembling seeing Preesha as she remembers Preesha slapping her.

Preesha apologizes to the lady and gives her money for her daughter's fees.

The lady informs her that her daughter's name is Roohi which makes Preesha's head ache.