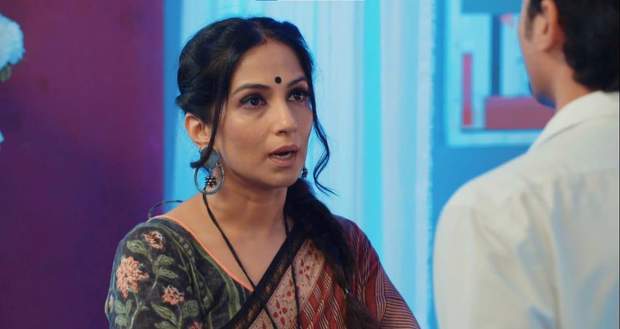 Rudraksh attacks the servant but Revati calms him while the servant says that he had gotten a call from someone named Sharda.

Revati snatches the servant's phone and calls Sharda from his phone to find the truth.

Sharda's phone starts ringing shocking everyone while a flashback again shows Revati planning it with the servant.

Back in the present, Preesha and Rudraksh refuse to believe the servant and conclude that someone is trying to set Sharda up.

Preesha says that they should go downstairs as the party is still going on while Revati tells Rudraksh that they couldn't prove Sharda's innocence as there are no CCTV cameras in the house.

Further, the couple exchanges the rings in front of everyone while Preesha mischievously tells Rudraksh that she intentionally got the smaller size of the ring to take revenge for the dress he brought for her.

Later, Vasudha stops Preesha and questions her why she didn't doubt Sharda.

Feeling shocked, Preesha says that Sharda is Rudraksh's mother and also a mother figure for her.

Vasudha retorts that the Khurana family doesn't think about Preesha while Revati overhears them and goes to Sharda.

There, Revati gossips Sharda about Preesha and Vasudha and tells her to go to Preesha's room.

Vasudha talks to Preesha about Yuvraj killing Rajiv while Sharda hears them and questions Preesha why she didn't inform her of it.

Meanwhile, Rudraksh goes to the security room and looks at the footage of a hidden CCTV camera showing Vasudha putting Sharda's call on charge and calling someone.

Revati looks at him from afar and gets happy while recalling doing everything as a part of her plan.

Back inside the house, Vasudha stands up for Preesha and restates all the things she has done for the Khurana family.

However, Sharda says that she can question Preesha as she is her daughter but Vasudha leaves saying that a daughter-in-law can never be a daughter.

Preesha tries to calm Sharda who leaves without saying anything.