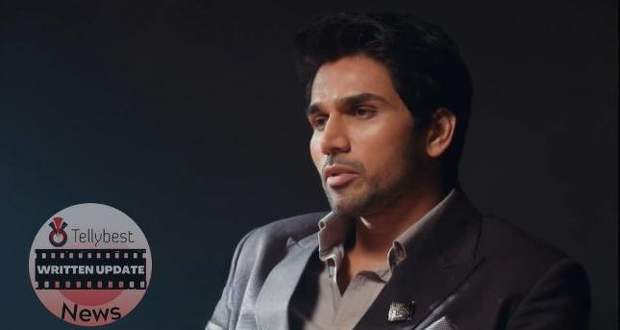 When she asks him if they can still be friends, Raj states he has strong feelings toward her and cannot JUST be friends.

Later, Vidyut pulls Pihu into a corner and asks her the reason she did not support him yesterday in front of Preesha.

Pihu pretends to be oblivious but Vidyut doesn’t let her go.

He tells her if she doesn’t have the strength to say the truth, she IS wrong just like him.

Raj panics and takes Vidyut to the clinic as he claims Vidyut hasn’t eaten anything since yesterday.

Pihu gets upset as she realizes that Vidyut still hasn't broken his Karva Chauth vrat and was speaking the truth.

She goes to see Vidyut who is now woken up & resting on the bed in the college's clinic.

Pihu gives him a glass of water to drink and apologizes to him, making Vidyut smile slyly.

However, Pihu is quick to clear the air by saying she has no feelings for him but Vidyut hardly believes her.

At Khurana house, Preesha, Pihu, Sharda, & Rudra pick out jewellery for the marriage.

Pihu goes on to try one necklace while Vidyut says she can wear it on the day of their marriage.

Internally, Pihu experiences butterflies but plays it cool outside.

Vidyut then asks the jeweler the price of the necklace and it costs 50 lakhs.

Inside, Vidyut promises to buy it one day for Pihu.

After Vidyut leaves, Digvijay calls on Pihu’s number and gets informed that Rudra & Preesha are getting married within two days.

However, the necklace is found in Vidyut’s room who claims that he did not steal it.

The jeweler taunts him, saying if he couldn’t afford it, he just stole it.

Later, Rudra slaps Vidyut, screaming at him for ruining his reputation, and giving a chance to a mere outsider to question their family's ethics & morals.

Sharda also gets mad while Preesha shames Vidyut for not changing for the good.

Vidyut gets teary-eyed after Rudra calls him ‘chor’ while Raj becomes a silent spectator of this drama.

© Copyright tellybest.com, 2022, 2023. All Rights Reserved. Unauthorized use and/or duplication of any material from tellybest.com without written permission is strictly prohibited.
Cached Saved on: Monday 21st of November 2022 07:45:00 AMCached Disp on: Wednesday 7th of December 2022 01:18:30 PM