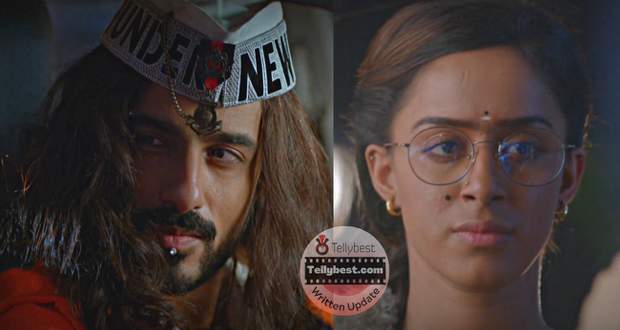 Today's Yeh Hai Chahatein 19th December 2022 episode starts with Malti who is Nayantara's mother, running around the house and instructing everyone to do their tasks efficiently since the groom's family is arriving soon.

Malti informs the Chef to make Payasam fast while she paces in the hall to see if it is getting decorated nicely or not.

Just then, Ishani who is Nayan's sister and Malti's younger daughter comes and informs her that Nayantara Akka is almost ready and will come downstairs in no time.

Ishani goes off, while Malti's two friends approach her and say she shouldn't worry about the decorations since she is an expert in fixing other people's marriages.

Malti laughs and says her two daughters act as if they are her Amma but her friends state she is very lucky to have them & Malti agrees.

Meanwhile, Ishani applies makeup on Nayantara who says she doesn't need it since it won't change her face.

However, Ishani reminds Nayantara smilingly that makeup is also used for the enhancement of one's beauty.

Downstairs, after Malti leaves to see other preparations, one of her friends gossips with the other saying, the guy marrying Nayantara is unlucky since she is ugly compared to him as well as Ishani who is fair-skinned and beautiful.

She further says that it is a contract because Malti had given the groom's family a hefty dowry to marry Nayantara.

Nayantara fully gets ready and sees herself in front of the mirror, adorning a white saree with golden borders and her spectacles that keep sliding down her nose.

Ishani suggests that Nayan remove it when suddenly, Malti enters the room and gets emotional to see Nayan.

As soon as she applies kala tika behind Nayantara's ear to ward off the evil eye, Nayan & Ishani's grandmother stops Malti and says she will do it.

Ishani laughs along with Nayantara when their grandmother says since she is Malti's Amma too, so she has the right to apply the black tika.

Suddenly, Malti's name gets called by some people outside the house and she rushes along with Ishani & Dadi.

The groom's family creates a scene outside, screeching that Nayantara's bad luck caused the groom and his parents an accident.

His side of the relatives states that Nayantara's misfortune almost stole Ramanand's (the groom's) parents as they are in the hospital right now.

Dadi screams and asks the groom's aunt if she is out of her mind to say such stuff when the driver should be blamed.

Ishani speaks in favor of her akka, Nayantara, saying she doesn't deserve to go in such a house while Ramanand's aunt says Nayantara will only be blamed since girls take their luck to the house they get married in.

The groom's side of the family breaks off the marriage as Nayantara hears all of this from the balcony.

Malti joins her hands and apologizes to the groom's family for Ishani's harsh words, requesting them to give the dowry of five lakhs she gave.

The groom's family acts oblivious and says "what? dowry!".

Unable to control her anger anymore, Nayantara walks down and tells Malti not to say sorry since Ishani said nothing wrong.