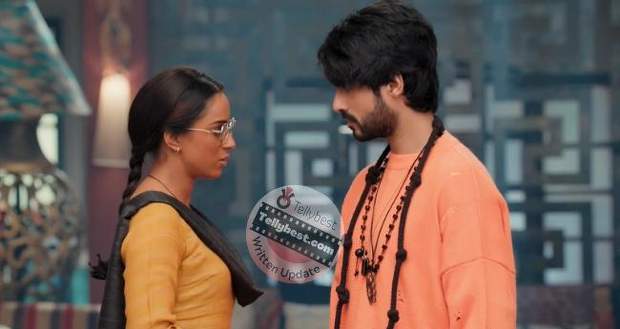 Today's Yeh Hai Chahatein 19th January 2023 episode starts with the doctor coming out of the room and informing Samrat, Mohit, and Nayantara that Ishaani is not in a good condition.

She talks about Ishaani's critical condition and tells them that they have done everything they could medically but now they have to pray for a miracle to happen.

As the doctor leaves, Nayan walks to the temple and prays for her sister to get fine.

Samrat gets shocked and questions Nayantara while she tells him that she hid the truth from everyone since it was an order from Malti.

Nayan states that all the guys who had come to meet her for marriage would select Ishaani to marry.

Samrat calls Nayan a hypocrite and tells her that she has been doing the same thing as him since she helped her sister while he was trying to help his own sister.

Nayan tells him that she does need to explain herself to him and calls Malti informing her to come to the hospital.

Malti gets emotional and hugs Nayan tightly while Revati also comes there and tells Sam that he does not need to stay there anymore.

Malti comes to Revati and argues with her while stating that she is there only for her daughter who is fighting between life and death.

Revati turns to Sam and tells him that Iyer is the one who tricked the marriage between Ishaani and Mohit.

Samrat tells Revati that it does not matter now while the doctor comes there and tells them that Ishaani is out of danger.

They all rush inside to see Ishaani who cries to Nayan that the person had beaten her a lot and even made her unconscious.

Nayantara tells Ishaani to try to think who did it while Ishaani says that it was Samrat.

Everyone gets shocked while Ishaani states that when Sam was hitting her, she saw his shoes which he is wearing still.

Nayantara starts rebuking Samrat as she states that she knew it was him.

However, Revati tells Nayantara that she is out of her mind and tells Ishaani how can she accuse Sam only based on the shoes he's wearing.

Revati takes Samrat back home and later paces in her room wondering how cunning Nayan is that even Samrat told his heartfelt things to her.

She wonders how Samrat got emotional in front of Nayan and states that he will get out of her control if Nayan returns to his life.

Revati recalls her past as she states that she cannot bring the girl whose face matches the face of the person who ruined her life in the past.

Blacky agrees while Revati tells him to come home first and use Samrat's shoes to kidnap Ishaani so that Samrat gets framed.

Back in the present, Revati accuses Nayan and Ishaani of trapping rich boys for money and states that even her mother might be the same as them.

Nayan retorts and tells Revati that she should use this sentence for her and her kids since all of them are manipulators.

Sam asks her how she can talk like that to his mother while she argues that Revati is the one who started it.

Sam leaves while telling Revati that he does not even want to see Nayan's face.

© Copyright tellybest.com, 2022, 2023. All Rights Reserved. Unauthorized use and/or duplication of any material from tellybest.com without written permission is strictly prohibited.
Cached Saved on: Wednesday 25th of January 2023 12:30:47 PMCached Disp on: Monday 6th of February 2023 05:46:41 AM