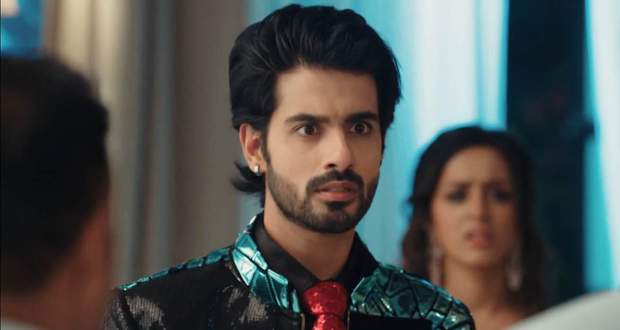 Today's Yeh Hai Chahatein 19th May 2022 episode starts with Preesha informing GPS about Vasudha's behavior towards Sharda saying that it is very wrong of her.

Elsewhere, Rudraksh finds comfort in Sharda and cries to her about feeling betrayed by Preesha because of her lying about Rajiv's call.

However, Sharda also says that they cannot turn a blind eye to all the things Preesha has done for them when he informs her about what he saw on the CCTV footage.

Rudraksh doubts that Vasudha might have been the one to set up the moon incident.

The next day, Vasudha bumps into Revati at the temple and leaves after small talk while Revati sighs thinking that she got saved in time.

At Vasudha returns home, she sees Sharda helping the decorators move things inside the house and does small talk with her.

Vasudha recalls that she forgot to bring the Gajra's for everyone and talks the decorator if he can get them.

Sharda sees them and gets suspicious but doesn't interfere.

Revati goes to Saaransh and Roohi and asks them about their plan while they reveal that they are going to shower Rudraksh and Preesha in Haldi.

Later, the Haldi ceremony starts and everyone celebrates while Saaransh signals the decorator.

Suddenly, Rudraksh and Preesha are showered with flowers and Preesha starts having an allergic reaction which confuses everyone.

Rudraksh takes Preesha to their room and gives her a shot of medicine for the allergy.

Sharda and Vasudha come there to check up on her after which Vasudha and Sharda start arguing.

Rudraksh calls in the decorator and questions him when Revati comes there and accepts it was her who had changed the Haldi with flowers.

Revati apologizes to Preesha saying that she thought flowers would be a better option.

Revati leaves after advising Preesha to take a shower.

Vasudha mocks Sharda for accusing her when Sharda says that she had a reason and reveals the CCTV footage.

Feeling insulted, Vasudha leaves there saying that they are trying to accuse her while Rudraksh apologizes saying they didn't intend to hurt her feelings.