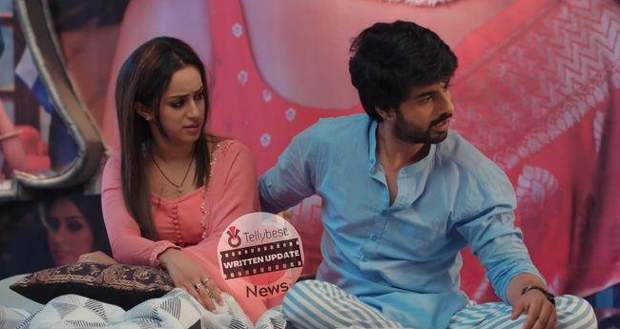 Today's Yeh Hai Chahatein 19th October 2022 episode starts with Rudra screaming at Vidyut about why he asked the jeweler for the price of the necklace.

Vidyut has no answer while Raj grins at the back to see Rudra get so angry at Vidyut.

In the flashback shown, Raj discovers that Pihu has feelings for Vidyut & feels betrayed.

Feeling backstabbed, Raj states that Pihu is playing with both of their feelings.

Quickly, Raj then hides the same necklace Vidyut asks the price for to teach him a lesson.

The flashback ends as a crying Vidyut asks Rudra to trust him.

However, Rudra asks Vidyut to get out of the Khurana House & drags him out.

To appear good, Raj asks Rudra to give him another chance while Rudra compares both of them.

Raj then asks Vidyut to apologize to everyone but Vidyut states he didn't steal anything.

Later, Preesha gets confused as to why Vidyut would steal the necklace.

The next morning, Preesha & Raj have breakfast together and Raj reveals that he and Pihu are not friends anymore but he still loves her.

Pihu hears both their talk while a strict Preesha asks her if she likes somebody else.

Meanwhile, Vidyut gets down on his knees in front of Rudra and says he didn't steal the necklace.

Rudra asks Vidyut even if he did not steal it, why did he ask about the price and for whom.

He further says that he kept karva chauth vrat for her but due to a misunderstanding, Pihu's blouse got snapped open that day.

Revealing that Pihu is still in denial of her feelings, Vidyut says she doesn't want to hurt Preesha too.

Rudra suddenly smiles and tells Vidyut his love story with Preesha also started like this.

Telling Vidyut to fight for his love, Rudra says he will talk to Preesha after the marriage.

Afterward, Rudra asks Preesha to go the court with him, intentionally leaving Pihu to go to college with Vidyut.

Grabbing Pihu's hand, Vidyut takes her to a rusty place where there is hot coal.

Pihu gets angry at Vidyut's silence while he puts the coal on the fire.

She gets scared as Vidyut walks barefoot on the burning coal.

Vidyut tells Pihu he is trying to prove his love for her while Pihu cries and begs Vidyut to not do this.

He asks Pihu whether she loves him or not & she finally confesses.

Saying I love you to him, Pihu gets Vidyut out of the coal as he lies on the ground.

Getting on top of him, Pihu hugs him.

On the other hand, Preesha finally gets a divorce from Arman who hands her a paper in the court after Rudra goes to talk to the lawyer.

Preesha reads the paper & suddenly gets tensed, thinking how her marriage with Rudra is possible now.

© Copyright tellybest.com, 2022, 2023. All Rights Reserved. Unauthorized use and/or duplication of any material from tellybest.com without written permission is strictly prohibited.
Cached Saved on: Monday 21st of November 2022 04:48:13 AMCached Disp on: Sunday 4th of December 2022 11:30:14 PM