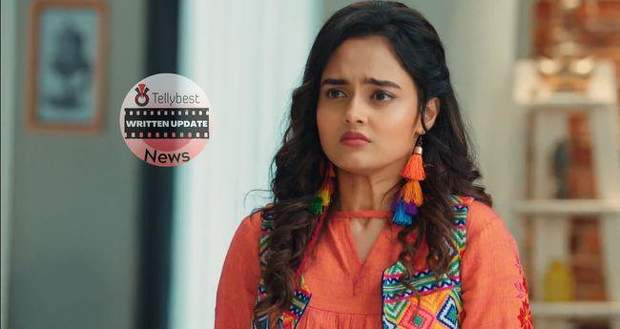 Today's Yeh Hai Chahatein 19th September 2022 episode starts with Arman suggesting Digvijay he takes Preesha to London while Pihu gets scolded by Digvijay saying she shouldn’t talk much with Raj or Rudra.

To ensure this, Kanchan goes to the recording sessions with Pihu.

On the other hand, Pihu signals silently to Rudra, pointing toward Kanchan.

Meanwhile, Vanshika introduces Kalindi to both Raj and Pihu as their vocal mentor but Kalindi tries to flirt with Raj not so subtly.

Pihu notices this and taunts Kalindi, asking if she will only mentor Raj.

After the recording session, Pihu escapes when Kanchan looks elsewhere and informs Rudra about Arman taking Preesha to London.

Rudra gets panicked and heads toward Khurana House where Arman can be seen talking to someone on the call to book two flights to London.

Rudra arrives unannounced and Arman gets irritated, asking if Rudra has any shame left in him or not.

Rudra acts cool and tells Arman he loved Preesha but not anymore.

He has no connection with her whatsoever and flips wedding card invites on Arman’s face.

Rudra says he is getting married to Prema, AKA Vanshika, who has been his best friend.

Rudra says since Preesha left him and cannot stop humiliating him in front of everyone, he cannot care less.

Preesha looks at Rudra suspiciously while he acts rudely and meets Pihu outside the house.

Pihu asks Rudra if he is marrying Vanshika for real and Rudra says no.

According to Rudra, if he does this, Arman will feel less threatened by Rudra’s presence while Pihu can stop Preesha from going to London.

Later in the afternoon, Pihu asks Preesha how she is feeling and Preesha says she cannot believe Rudra is marrying someone so quickly.

Pihu says Preesha must attend Rudra’s marriage to say a final goodbye to him and Preesha agrees.

Smiling, Pihu feels good inwardly while Preesha goes to Arman and shuts his laptop, announcing she will not go to London and wishes to attend Rudra’s wedding.