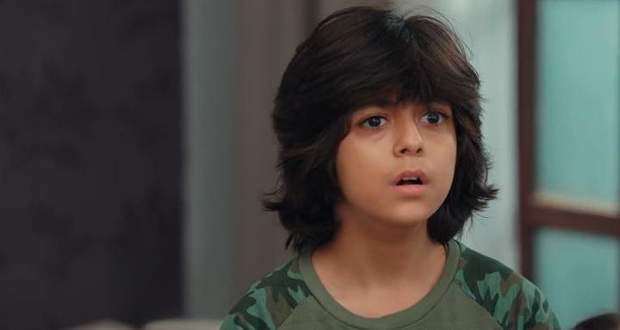 However, Arman is smart and takes Preesha away saying Rudra is using his kids to influence Preesha’s mind.

Roohi gives a disgusted look to Arman when he removes Roohi’s finger away from Preesha’s.

All the Khuranas walk home dejected and Rudra goes straight to his room and starts drinking alcohol.

Both the kids scold Rudra for depending on alcohol, telling Rudra that it is not the solution to his problems.

Roohi then takes the bottle of liquor away from Rudra and consoles him saying, "Lal Tamatar" and Roohi will both find a "Jugaad" together to get back Preesha.

The next day, Roohi lies to Saaransh saying she has an extra Math class to attend.

Saaransh believes Roohi while Roohi instructs the driver to take out one tire of the car.

The driver nods hesitantly but when Roohi starts crying in the middle of the road suddenly, he feels concerned.

Roohi scolds the driver and says he should do only what Roohi asked him to do.

Roohi’s plan gets successful when Pihu spots her crying.

She tells Pihu she has to pee and begins to jog on the same spot to make it look like she cannot hold her pee anymore.

Pihu then takes Roohi to her house, making Roohi happy since her plan was to see Preesha again.

Roohi gets all the love and affection from Preesha when she goes to Pihu's house and tells Preesha they are friends now.

Suddenly, Roohi smells Dosa cooking in the kitchen and asks if she can have two, making Preesha laugh.

Preesha lovingly prepares Dosa for Roohi while Roohi pretends her finger getting burnt due to the hot Dosa just so she can have Preesha hand feed her.

Meanwhile, Raj brings the ladoos back home that Pihu gave him and asks Rudra to taste them.

After Rudra tastes them, Rudra asks Raj if he can keep all the ladoos because he knows it is made by Preesha.

On the other hand, Roohi makes a mistake by saying it has been a long time since she ate any food made by Preesha but covers it up, saying her "Mumma".

However, Digvijay spots Roohi spending time with Preesha and gets alert.

© Copyright tellybest.com, 2020, 2021. All Rights Reserved. Unauthorized use and/or duplication of any material from tellybest.com without written permission is strictly prohibited.
Cached Saved on: Monday 1st of August 2022 08:42:23 AMCached Disp on: Tuesday 16th of August 2022 04:35:11 AM